Andrew McAfee was a successful musician and conductor.

Young and happy, newly married, moving into a new house, within six months Andrew and his wife were experiencing severe symptoms.

‘We would lay in bed, feeling this energy crawling over our faces.’

Every day between five and seven, they would both get headaches.

Dark circles began to appear under their eyes, they both experienced fatigue and emotional distress.

Thinking it was something to do with their electricity, they called an EMF consultant who promptly discovered that they had significant wiring problems.

The consequence of which was high magnetic fields, a fan that wasn’t grounded properly…they literally had 9 volts of electricity running through their bed.

The EMF issues were resolved but these exposures had created a vulnerability and sensitivity in Andrew.

His body started to react to all types of electromagnetic frequencies and he could no longer use his phone.

‘When I drove past a cell phone tower I could feel the burn on my face.’

At his worst when a person would walk into a room with a cell phone he would be overcome with fatigue and feel like he needed to go down on his knees. If they stayed in the room longer than two minutes, he would sweat, start to feel irritated, and could go into a rage.

‘It felt like a nail was being driven into my head.’

But these experiences had such an impact on Andrew that he eventually relinquished his career in music and became an EMF consultant.

Andrew say’s ‘I think the greatest realization that I had after doing thousands of homes is every home is unhealthy. A lot of people just say, “Oh, it’s a brand-new home. It’s fine.” No, they’re built as cheaply as possible and with the minimum code required, and they are unhealthy.‘

Do you earth indoors, using earthing straps, pads, sheets etc? This interview is for you.

Partnering with R Blank, CEO of Shield Your Body, Andrew has developed a new innovative plug-in product to help people earth their body indoors more safely. Note: there is a soon to be released pro version of this device (needs installing by an electrician) to eliminate man-made currents on your ENTIRE home electrical system – the grounding conductor.

Protect yourself & your family – order the NCB with 20% off your order with the coupon code “SAFELY”.

Interview – NCB: Saving The Planet And Mankind From Man-Made Currents 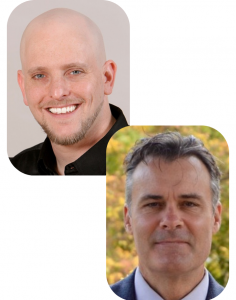 R Blank is the CEO of Shield Your Body, with hundreds of thousands of customers in over 30 countries. Shield Your Body offers EMF education and innovative EMF protection products. R is co-author along with his father, Dr. Martin Blank of Overpowered, and host of the Healthier Tech podcast available on all major podcasting platforms.

Andrew is a former musician and conductor. He played with the Honolulu, Columbus, and New Mexico Symphony Orchestras but was led to a ban in his career in music when in 2001, he became electrically hypersensitive after moving into a new home with his wife. In 2017, Andrew became a full-time EMF consultant and in 2019, he earned a career diploma in Residential Electricity.

Listen to my interview with R Blank & Andrew McAfee and discover:

The interview will last approximately one hour and it’s FREE to listen to for 48 hours from the time of broadcast.