A few days ago I received a question from Jim, one of my readers, regarding flying and EMFs. As I thought the reply might be useful to anyone electrosensitive/concerned about emfs who is considering flying on a plane, below you can see Jim’s question followed by my reply.

Lloyd,
I really enjoy your blog/news service on EHS. I became sensitive last fall when my office situation changed to a place where I became literally surrounded with dozens of wireless devices. I had clues to my sensitivity before this but was able to live normally. Now I pay attention to what is around me and leave the area if it gets too “hot”. I carry a small GHz meter with me at all times.
Now, my question: I have not done any major travelling since I’ve become sensitive. This is because of the potential problem with hotels and the roadways being loaded with microwave. If I get an exposure while away from home, I have no “safe” place like my home to go and recover.
What are your thoughts about flying. I know airports will be a bad place because there is lots of cell phone/Iphone/blackberry usage. Going through security has lots of EMF’s. If I could somehow tolerate the airport and board the plane as late as possible, then maybe I could tolerate the actual flight. Do you think that there is lots of EMF on the plane while in-flight? I know passengers shouldn’t be a problem because they have to turn their wireless devices to airplane mode. I know they may be using laptops, but at least they are in “battery” mode so at least the charger is not working. Sitting in a big metal tube and being trapped for hours doesn’t seem very feasible. I just wondered about your thoughts on this.
Thanks,

This is the reply I sent to Jim :

Air travel is something that scared the hell out of me for a long time.

Electrosensitive Man Flies To The Caribbean 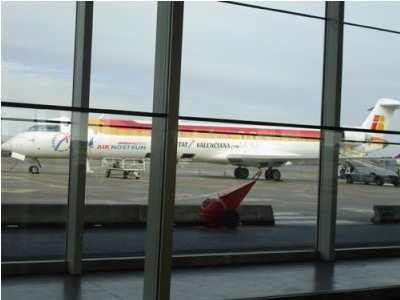 My philosophy with electrical sensitivity right from the very beginning was “I’m not going to be beaten by this thing”. So just as I’d decided that I had to carry on working I also decided to continue to take holidays as a family. But post 2002 these were to mainly ‘not so’ far away locations.

In 2007 we’d decided as a family to go to the Caribbean. The beaches and hotels looked just stunning in the brochure. But I was still struggling with my symptoms of electrosensitivity

My first big problem was the airport. The second one was the eight-hour plane flight. Despite my condition, something inside me said I should go ahead with the holiday. So I did.

EMFs In The Airport

The worst part of it was the anticipation. We flew from Charles de Gaulle airport in Paris. CDG airport is like a big gold fish bowl which you can’t go out of to get a breath of fresh air and you can’t open any windows. I found it very oppressive and the thoughts of all the EMFs being emitted from the airport WiFi and Radar was not comforting.

When we got to the security checks I was feeling very sensitized. But I’m sure a lot of this was self induced stress brought on by the thought of the flight which was to follow.

Queuing in the airport was a challenge. The airport seemed to be full of people having long drawn out cell phone conversations about nothing very important. I maneuvered to avoid them.

Flying and EMFs On The Airplane

Before we booked the holiday I’d got all these ideas about the EMFs I was going to be subjected to. I’d already researched the type of plane we were going to fly on, looked where the communication antennas were placed and where the most electronic equipment was. Of course all my worries were largely unfounded and I suffered little to no ill effects either on the outward bound or the return journey. Here’s how I did it :

The Critical Part Of The Flight

As far as the flight itself goes I didn’t feel any electrosensitivity symptoms. The most challenging part of the journey was when the plane landed. As soon as the plane touched the tarmac was switch on their cell phones and start ringing their friends and families. This was tough and I did feel trapped. There were four of us in our party so we just swapped seats to make sure that I was as far away from other passenger’s cell phones as I could be.

I could have used my hat and protective nets, but I chose not to. The exposure was short lived and I did not feel any after effects.

Tips For A Low EMF Holiday

Taking the necessary precautions for the flight is important but perhaps even more important is your holiday accommodation. See my article Tips For A Low EMF Vacation.

Flying and EMFs – My Conclusion

Since this flight in 2007 to the Caribbean we have done a multi stop-over trip, Madrid, New York, Memphis and Florida. Then last year we did a 30 hour door-to-door trip to Hawaii and we are planning another cross Atlantic trip this year.

My advice re flying and EMFs is take that holiday, plan, prepare and equip yourself well for the journey. Be sure that your trip will go well and it will go well.