Updated: 12 August 2017. Air travel is already stressful enough on your body. To make matters worse many airlines are rolling out WiFi in planes. So how can you fly low EMF?

Firstly, airline travel subjects you to significant levels of cosmic rays or ‘cosmic radiation’. When I say cosmic radiation I’m referring to a collection of different types of radiation from many different of sources – the most important being cosmic background microwave radiation.

This is quite different to the electromagnetic fields (EMFs) I usually I talk about.

Cosmic radiation is a naturally occurring form of ionizing radiation produced by the sun and other stars and planets. The earth’s atmosphere and magnetic field protects the earth from most of this cosmic radiation. But when you fly, because of the altitude, this protection is greatly diminished.

For instance, flying from New York to Los Angeles exposes you to approximately 6 times as much radiation as a typical dental x-ray. A 10-hour flight across the North Atlantic exposes to more than double that amount. 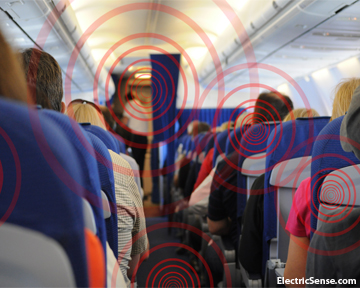 On the low frequency side, electric and magnetic fields are created in a similar way to in a home setting, except it’s way more complicated. In airplanes electrical engineers are given free reign. Transformers, rectifiers and inverters are used liberally to change the voltage or type of current.

Sources Of EMFs In Planes

Here are some sources of EMFs in planes :

Why Are EMFs In Planes Dangerous?

Firstly, a planes metallic structure can intensify the effects of EMF exposures, particularly radio frequency radiation (aka wireless). It’s called the Faraday cage effect. This radiation is trapped in a metal enclosure which exacerbates the effects of this radiation. Would you consider sticking your head inside a microwave oven when it’s turned on? I don’t think so.

Secondly, it’s not just a about airplanes. It’s about EMFs per se. There is a significant amount of research that points to numerous adverse biological effects of these man-made EMF exposures, including:

These exposures are linked to a number of serious diseases including multiple sclerosis, Parkinson’s disease, Alzheimer’s, cardiovascular disease, brain tumors and cancer.

In addition to the cosmic radiation and EMFs generated from the planes’ electrical and communication system, over the last few years WiFi radiation has also been introduced into the toxic soup of airline travel.

When we talk about WiFi radiation we are actually talking about devices that use radio-frequency or microwave radiation to send data back and forth through the air, wirelessly. The problem is that this WiFi radiation can penetrate pretty much everything that stands in it’s path, including you.

If you’re still unclear about the dangers of WiFi radiation click here.

How To Choose A WiFi Free Flight

According to a survey conducted by Routehappy, a company that evaluates in-flight amenities, 39% of airlines worldwide now have WiFi fully rolled out. Using the data from their survey I’ve compiled a WiFi radiation in planes analysis in the form of a bar chart, see below: 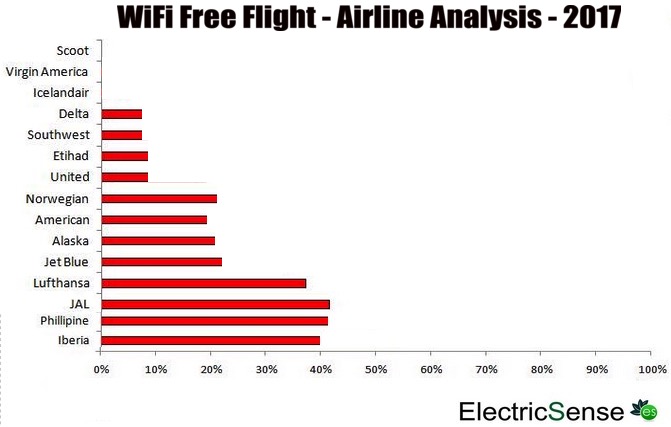 To compile my bar chart I took the data from Routehappy.com which shows for the worlds top airlines the percentage of ASMs (number of seats multiplied by number of miles flown) with at least a chance of WiFi, and inverted it.

So in my bar chart, because in principal there is zero chance of booking a WiFi free flight with Scoot, Virgin America and Icelandair they are shown as 0% – meaning, if you are concerned about in-flight WiFi radiation exposures you should avoid booking with these airlines.

Airlines To Choose If You’re Concerned About WiFi Radiation – Currently

My bar chart shows that your best chance of flying WiFi free is to book with Philippine Airlines followed closely by Iberia and Air Europa.

From Regular WiFi To Super WiFi

This analysis masks the level of radio frequency radiation emissions you are being subjected to. Most airlines, if they do offer WiFi, currently offer fairly low download speeds which implies lower radiation exposures. But Fortune.com reports that “passengers now demand a home broadband-like experience….so far only a few airlines meet that standard”.

The worst offender is JetBlue which is reported to be nearing completion of a fleet-wide broadband roll-out that would allow passengers to access streaming services – which implies higher wireless radiation emissions.

This WiFi roll-out is clearly demand driven. A 2016 survey of airline passengers by Honeywell Aerospace reveals that travelers now “expect a reliable connection to stay in touch with their friends and family, get work done, or be entertained.”

But airlines are not totally blamed. The Honeywell Survey found that over 20% of passengers have already abandoned their preferred airline for another company with better in-flight WiFi.

Here are my tips for flying low EMF. Try to avoid:

This might seem like a lot of things to avoid and you’re probably thinking, where do I sit? Well, you’ve really got to do your best within these parameters. And then relax…