Let me quickly dispel any illusions you may have on this subject.

There is no such thing as a safe cell phone, or a safe mobile phone.

I have been aware of the dangers of cell phones since 2002 when I became electrosensitive.

cell phone next to my head = excruciating pain

no cell phone = no pain

But I can understand for most people reading this they will need a bit more convincing. So if I had to convince somebody quickly today what would I say?

Cell Phone Dangers – What Our Institutions Are Saying

I would start by quoting the World Health Organization’s recent announcement (see my last post), though a little limp it was a landmark decision. The WHO, following a review of the studies to date announced that “ cell phones are possibly carcinogenic”. Limp because using the word “possibly” in the same sentence as a word “carcinogenic” is not all that convincing, but then this has far more to do with politics than safeguarding the public’s health. And limp because the US Presidents cancer panel had already said basically the same thing a year earlier.

I would then quote the Council of Europe’s announcement that cell phones and wireless Internet connections have “potentially harmful” effects on humans.  They also recommended that immediate action was required to protect children.

Cellphone Radiation- What The Science Says

Literally hundreds of independent studies show very clearly the dangers of cell phone radiation (that’s to say that from a cell phone or cordless phone) and the risk of brain tumors. For a really great explanation of these and an overview of the subject I would recommend watching this video presentation by Prof Martin Blank of Columbia University. 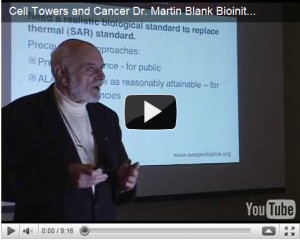 For a clear explanation of  what I call “hot head syndrome” and the 18 million pulses a day which are given off by your cell phone I would suggest listening to Dr Andrew Marino who is professor at the department of neurology at Louisiana State University Health Sciences Center. I can also recommend his book “Going Somewhere – Truth About A Life In Science” which talks about just that, his life in science, which has been almost exclusively devoted to studying the effects of EMFs. It’s a great read.

The bio initiative report published in 2007 is also essential reading. It reviewed more than 2000 studies. It remains one of the most important scientific publications radio frequency radiation and electromagnetic fields created by wireless technology. The report concluded that current state safety standards were not protective enough of the public.

Perhaps you are still harboring some doubts on the safe cell phone question because of SAR.

You think that buying a cell phone with a low SAR will somehow exempt you from the adverse health effects. A low SAR cell phone will do nothing of the sort. The SAR is such a poor indicator of exposure to radiation. Your absolute best line of defense from cell phone radiation is to just keep your cell phone away from your body when it is switched on and switch it on as little as possible. See my cell phone radiation protection tips for more detailed advice on this.

For me the words “safe” and “cell phone” just don’t go together….