For some time now I’ve been looking for the best EMF meter to measure radio-frequency (RF) or cell phone radiation.

There are a lot of ‘average’ meters out there and a few good ones. It really depends on how much you want to spend and what you want to measure.

I’d heard about the Cornet ED85EX. For me the only way to find out was to go out and buy the meter and see for myself….. 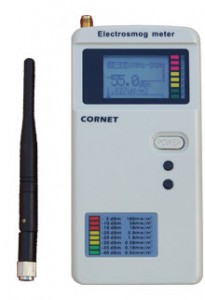 What Does The Cornet ED85EX EMF Meter Measure?

The Cornet ED85EX EMF meter is designed to measure radio-frequency (RF) radiation over a very broad frequency range – this is it’s principal strength.

Here is the technical specification:

* below 700MHz and above 6GHz an external antenna is required (not supplied).

From What Sources Can The Cornet ED85EX Measure Radiation?

Typically this meter measures radiation from the following sources:

What I Liked About This EMF Meter

There are two things that set this meter apart from other RF meters:

A lot of RF meters only go to 3 GHz. But more and more wireless devices operate above the 3GHz range, which can be a huge limitation. But the Cornet ED85EX EMF meter is capable of measuring RF radiation all the way from 1 MHz right up to 8 GHz. In terms of the range of measurement this meter is difficult to beat.

How To Use The Cornet ED85EX EMF Meter

Here is how you can use the Cornet ED85EX EMF meter to measure radiation in 5 easy steps:

I found it very easy to use. It comes supplied with a 9 V battery you just insert in the back, screw the antenna on and press the power button and you are away. It has both an LCD display where you can see the RF levels moving up and down as numbers and an LED display using colored lights, going from green to red, depending on the radiation levels (with red being the higher radiation levels).

There is much debate about what constitutes a dangerous level of RF radiation. It depends on which scientists you listen to. It also depends on whether your exposure is momentary, for instance when you go into a room with a lot of cell phones and wireless devices, or whether it is more long-term, as might be the case when you have a cell phone tower in close proximity to your home.

As far as long-term exposure goes, my own personal recommendation with this meter is that if the first yellow LED lights up when you take your readings then you should be looking for solutions to minimize your exposure.

What are the disadvantages of the Cornet ED85EX meter?

It being a single axis meter is not necessarily a disadvantage for measuring RF radiation. It can allow you to determine where the radiation is coming from if you stand in one spot and turn the meter in different directions.

If you’re looking for a more multi-purpose EMF meter the Cornet ED78S might be a better choice for you. In addition to measuring RF radiation it also measures magnetic field radiation (in milligauss). The downside is that it measures a shorter frequency range than the ED85EX (the ED78S starts at 100MHz, so it can’t measure FM transmissions), the risk being that your true exposures are much higher than what your meter shows because the exposures are outside the frequency range of the meter. But the ED78S is a less expensive meter. Click here for my review of the Cornet ED78S meter.

Is This The Right EMF Meter For Me?

Start by asking yourself the right questions. Do you live near a cell phone tower? Or do you live in an apartment surrounded by other apartments equipped with WiFi, cordless phones and smart meters. Or is your car equipped with Bluetooth, which you don’t use, but you’re wondering if it’s still zapping you? Or maybe you’re interested in the health benefits of EMF mitigation? Or perhaps you’re displaying some of the symptoms of electrical sensitivity.

If you answered yes to any of these questions then the starting point is to take readings with an EMF meter which good measurement capability. If I had to put my finger on one thing that sets this EMF meter apart from other meters on the market it’s it’s very broad frequency range . This might sound like a small detail but it’s not.

If you take readings and your RF meter shows zero or near zero exposures because the emissions you’re trying to measure are above or below the range of the meter you’re just kidding yourself you’re in safe environment. The truth is you don’t know, which defeats the whole purpose of taking readings!

Where Can I Buy The Cornet ED85EX Meter?

At under $200 this EMF meter offers very good value. The Cornet ED85EX has been replaced by the Cornet ED88T, see my review here.

Updated February 2018.
*It’s actually the ED85EXS which is now being sold which is the same as the ED85 but it has sound and slightly better sensitivity.