Over the last couple of years a flurry of EMF books have come out.

Sam Milam’s “Dirty Electricity” which I’ve talked about a lot is one of them.

Another is Devra Davis’ excellent book “Disconnect” which I reviewed a few weeks back.

Light years before any of these books came out there was a book published which revolutionized the way people thought about EMFs and the human body.

It was a different world back then.

Which makes it all the more amazing.

And it was a time when cell phones existed but they were so expensive practically nobody had one. 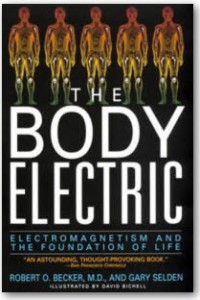 in this same year.

Robert O. Becker was no mister average. He was a U.S. orthopedic surgeon working mainly as professor at Upstate Medical Center in State University of New York, and as Director of Orthopedic Surgery at the Veterans Administration Hospital. So just an M.D.

But his passion was bio electricity. That’s to say the relationship between electrical currents and living things. He was trying to understand what causes limb regeneration. He did lots of research cutting off limbs from frogs and salamanders etc. which is well covered in the book. And eventually he developed a widely accepted technique for stimulating bone healing using electrical stimulation.

He didn’t know it at the time but the electrical signals he was detecting in the bodies of both animals and humans, were part of the body’s energy system. In his later book Cross Currents he spoke of a “data-transmission and control system” located in cells, transmitting information by means of a DC electrical current.

What I admire most was his honesty. At that time, and even today still, science was dominated by a mechanistic understanding of the body. His view was “OK we may not understand it well, and it may not be a subject of study in mainstream medical research, but these healing processes are happening. “

Sadly Dr. Becker passed away in 2008 but not before getting a Nobel Prize nomination. This book goes a long way to bridging the gap between Eastern philosophies and modern science. It’s an entertaining read and a good way of gaining a better understanding of how your body works.