Imagine you could walk about freely and know that your microwave radiation exposures were okay.

That you could walk into a store, ride on a bus or a train or share a car and know your exposures were within carefully set limits (set by you) without having to get an EMF meter out and take readings.

Well, this is the idea behind the RadAware personal microwave radiation exposure alarm. 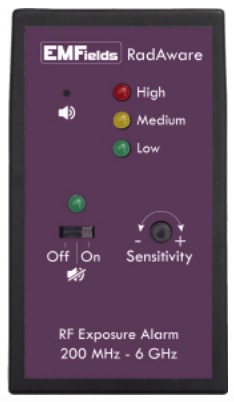 Here are the technical specs:

Why Would You Want To Buy A Personal Microwave Radiation Exposure Alarm?

The number of cell phone users in the world is expected to pass the five billion mark by 2019. 5G and the Internet of Things (IoT) promises to connect us in our homes, schools, workplaces, cities, parks and open spaces to over a trillion objects around the world.

Wireless is taking over the world. For all these devices to be able to connect, without wires, our world is being engulfed in an invisible sea of radio frequency microwave radiation exposures.

Some people consider these exposures harmless, they are not harmless. 2 points:

What EMFs Can The RadAware Detect?

The RadAware is designed to detect radio frequency microwave radiation exposures. That means it can detect radiation from the following sources:

According to the manufacturer, “the RadAware will also pick up most forms of electronic harassment (using RF up to about 6 GHz, and to a lesser extent up to 8 GHz).”

Is The RadAware An EMF Meter?

No. The RadAware is not an EMF meter. An EMF meter will typically:

The RadAware offers less precision but greater ease of use. It’s designed to enable you to:

With an EMF meter, the real benefit is when you do something that resembles an EMF survey and you note down your readings in specific locations at specific times. The RadAware is more suited to everyday use.

I made this video to give an overview of the meter:

If you want to be able to continuously monitor your exposures and you have electrical power socket nearby, then you can use the mains power adapter (sold separately here) instead of batteries. The power adapter has a connector that you attach to the internal RadAware battery connector, instead of the 9 volt PP3 battery.

How To Use The RadAware 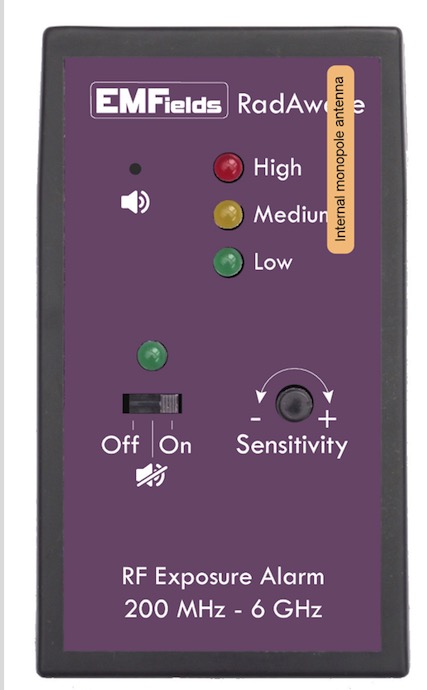 Every day just switch it, the previous days settings won’t be lost, pop it in your bag when you are out about and let it do it’s job.

Or perhaps you want to monitor your microwave radiation exposures when you are working in your office, just put it on the corner of your desk and forget about it.

When you have switched it on, usually with the sound on, then its a question of turning the knob to determine at what level you want the alarm to sound. The more you turn the knob in the clockwise direction the greater the sensitivity.

For instance, in your office you would set the sensitivity just below the level at which the alarm is activated, so that you would be alerted when your exposures would go beyond this pre-set level.

The only thing to avoid when using it, is putting your hand or anything else directly over the microwave antenna (as shown in image), which would impede it from detecting radiation.

The most effortless way of using it is with the sound on, that way providing you are within earshot you will be alerted to RF spikes beyond the pre-set level.

If you need to be more discreet, in a library or a place of worship for instance, then you would mute the sound so as not to disturb the peace.

How To Interpret the Alarm Signals

You can chose the alarm range that matches the exposure levels that you need to avoid – this will probably change depending on whether you are in an RF polluted area or not. 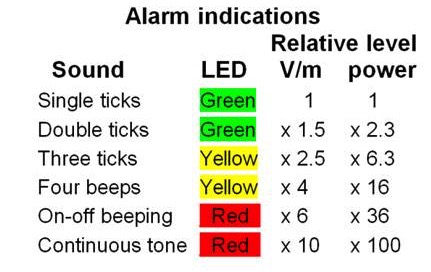 Alasdair Phillips the designer of the RadAware explains the finer points of the alarm,

‘the relative ALARM ratios are shown in the table with ‘green and one click’ being taken as the Reference level of “1” (the actual value of which can be adjusted with the sensitivity knob). So, for example, the ‘Red + on-off beeping’ alarm is at a level 6 times higher than the Reference V/m level and 36 times higher in power-terms’.

The most important characteristics of any EMF meter or any EMF detector are:

The RadAware ticks both these boxes. Most cell phone networks around the world operate in the 1-2 GHz range. Most WiFi operates at 2.4 GHz, with newer devices operating in the 5GHz range. It can detect all these frequencies – according to the manufacturer it can also detect those frequencies currently planned for 5G.

It appears to have very good sensitivity. I have stood it side by side with the Cornet ED88T, the Acoustimeter and Acousticom 2 and it’s sensitivity seems to be on a par with these meters – if anything it might be slightly more sensitive.

If you’re looking for an EMF meter, a device that will give you actual EMF readings, the RadAware is not for you. This is not really a downside, just something that needs to be stressed.

The second point I need to make is that, if you are electrically hyper sensitive (EHS) I believe using a device like this can create a state of hyper vigilance. There may be situations where the alarm tells you your exposures are high but if you are not in a position to reduce these exposures in some way, this might contribute to your symptoms.

This is not a criticism of the device, but a criticism of how the device is used. If you are EHS and you are following a program to overcome your symptoms then long term it will probably not be beneficial to use a device like this.

Its a dinky little device that packs a big punch. According to the manufacturer it’s thousands of times more sensitive than other microwave RF alarms on the market and detects over more than twice the frequency range.

If you’re looking to monitor your radio frequency microwave radiation exposures in real time then this is the perfect device for you.

You can buy the RadAware here.