The local utility company, Energex, wanted to put a power station 120 feet from her home.

It so happened that the lady next door to Donna grew up next to an electrical sub-station. Her father developed a brain tumor as did two of her other neighbors.

The people living across the road from Donna, the men, had developed kidney cancer and the lady was later to develop breast cancer. These people had power lines running very close to their bedroom window previously.

Intrigued, Donna researched the issue. She was shocked and alarmed by what she found.

Donna and her neighbors decided to take the utility company to court, which created a world first because as she says, “we were armed with a lot of information and a lot of passion”.

But this experience led her to an even more shocking revelation, that the wiring in your home, your work place and schools may be more of a problem than exposures from power lines and electrical substations.

Appalled by what she had learned Donna went on to write a book about her discovery, several books in fact; Silent Fields, More Silent Fields, Dirty Electricity and Electromagnetic Radiation.

The latest book by Donna Fisher is called “LIGHT that HEALS: Energy medicine today and beyond“.

Here are a couple of extracts taken from the back cover:

“Light therapies, in all their potent forms, are set to become the treatments of choice in the 21st century.”
Roger Coghill – The Healing Energies of Light

“The big frontier in medicine is Energy Medicine…..in the future it will not be about the chemistry –it will be about the energy!”
Dr. Mehmet Oz – The Oprah Show

In the first of her book Donna Fisher talks about the “underlying menace”, this “new plague, silent and invisible”, that is electricity and dirty electricity.

She traces the beginning of the dirty electricity phenomena back to the oil crisis of 1973 when because of the sudden increase in the price of oil and oil products and the realization that came with it that oil was going to get more and more expensive manufacturers began to produce electrical devices that would save energy. One way this was achieved was through the creation of electrical equipment that drew current intermittently instead of continuously as was previously the case.

Energy saving is good but not when it’s at the cost of your health.

Although Donna has already wrote at length about the dangers of dirty electricity in her previous books here she gives a good overview of the science and she details important case studies which show the many different ways it’s affected peoples lives. She reviews the work of Dr Sam Milham, Dr. Magda Havas and Dave Stetzer and also that of lesser known specialists.

Other chapters deal with the link between EMFs and aging, diabetes, EHS, CFS, MS and breast cancer.

We’ve long been led to believe that non-ionizing radiation as emitted by devices like cell phones, electrical wiring and other household devices are perfectly safe. Yet there are some striking and alarming parallels when you compare the diseases that the survivors of the Nagasaki and Hiroshima nuclear bombs developed with certain types of cancer and other serious diseases linked to cell phone radiation exposures.

Donna also reviews the scientific literature on radio frequency and microwave radiation. One very valid point she makes, which she credits to author Robert C Kane, is in comparing EMFs with other toxins. She says “irritants such as asbestos and cigarette smoke residue produce a result after a long continual exposure……RF radiation is known to cause destruction and damage to tissue even with a single exposure”. She rightly concludes that non-ionizing radiation, treated as harmless by many, is even more of a threat because it’s been woven into our whole way of life. 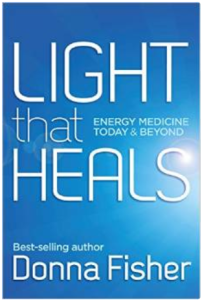 This is the second section of the book and it’s the part that most interested me. Donna shares information on a host of non-invasive and non-toxic EMF treatments.

My preference is for natural treatments. One of the most natural treatments is exposure to natural light. She says, “natural light is a non-invasive powerful tool, the basic component from which life originates, develops, heals and evolves”. All too often we are reminded of the dangers of sunlight in an attempt to get us to buy sun creams, sun glasses and other screening products. But when our skin is exposed to sunlight our bodies create vitamin D. And not just any vitamin D, but vitamin D3 which study after study has shown to have a highly beneficial effect on our health and well-being. Vitamin D production is just one of the many benefits of exposing yourself to natural light.

It’s refreshing to see a book like this talk about the role of energy healers, colors, crystals and chakras. Mesmer first suggested that the healing effect that occurs when a healer lays hands on a patient was due to a form of magnetic field. Donna offers a good review of the science which backs up these types of natural healing methods.

There’s a panoply of technologies that are already in existence that use these very same non-ionizing EMFs to treat and heal people. Treatments such as electrical diathermy have existed since the 1930s. TENS (transcutaneous electrical nerve stimulation) units have existed since the 1970s. More evolved versions of these devices are now in use. The PowerTube is used for pain therapy but the Institute of Functional Neuroscience in Australia uses a version of TENS to treat patients suffering from migraines, epilepsy and other neurological complaints.

Donna reviews dozens of these treatments. Some I’m familiar with like SCENAR (Self Controlled Energo Neuro Adaptive Regulator) based on Russian technology which acts on the nervous system, others I’d never heard of like Next Generation PDT (NGPDT), a form of whole body cancer treatment.

In fairness I can’t say that I’m drawn to these treatments but are they really any worse than dealing with illness by popping pills made from chemicals? If these technologies can help people then we can’t discount them just because they’re electrical/EMF based.

Perhaps it’s through the adoption of these kinds of treatments that the world will wake up to the realization that blanket, 24/7, virtually uncontrolled exposure to all manner of EMFs is not healthy or acceptable.

Click here to buy your copy of “LIGHT that HEALS: Energy medicine today and beyond”.

Besides being a best selling author Donna also lectures in Australia and internationally and is an advocate for standards to be introduced that protect the people.

– Donna’s story, how she became involved in this subject
– her experience with dirty electricity
– what light that heals protocols she’s tried
– healers energy

– before the day, by clicking here and sending me your question (if you’re not sure what time the teleseminar starts, the page has a countdown timer.)

– on the day, by putting your question directly to my guest

The replay is free but it’s only available for 24 hours after the event for those that signed up BEFORE the event.

This interview has now been broadcast. You can access the MP3 download and transcript of this interview here https://www.electricsense.com/interviews-emf-experts-offer/