The EU’s European Economic and Social Committee (EESC) recently issued a draft document on Electromagnetic hypersensitivity. It gives a superb analysis of the scope of the issue but what I particularly like are the very positive pro-active steps it proposes for dealing with EMFs. These steps fit into two broad categories: 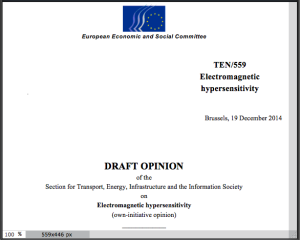 The EU paper draws parallels between the current situation regarding electromagnetic fields (EMFs) and the way asbestos was initially dealt with.

By way of introduction the document notes that :

– Two international bodies have drawn up guidelines on exposure limits for workers and the general public (ICNIRO and IEZZ). Following on from these recommendations, international organizations like the Council of Europe and the World Health Organization (WHO) have established electrical sensitivity as a “health condition that can prevent people from exercising an occupational activity”.

– Despite the many studies which have been published by universities from across the world since the 1930s and the fact that the WHO has acknowledged that radio frequency electromagnetic fields are potential cancer risks, there is no scientific consensus on the matter.

– Some countries consider ES to be an occupational illness whereas others treat it as a functional disability.

– More and more people are suffering from electromagnetic and environmental hypersensitivity syndrome.

– People affected by EMFs display no symptoms whatsoever when not exposed to EMFs which leads to the conclusion that any symptoms that diminish or disappear when the person moves away from the source constitute electromagnetic hypersensitivity, even though according to some doctors, scientific evidence of a direct causal link is lacking.

– ES sufferers experience a serious deterioration in their quality of life, not only because of the physical symptoms it usually entails but also because their lives are totally disrupted by the need to avoid exposure.

This is what I liked most about this document. It gives comprehensive recommendations on how to help people that are already suffering from EMFs and how to prevent more people developing the condition. It recommends:

Public health measures should be considered. Reference is made to the current response to Ebola.

The EESC suggests the following measures on consumer, economic and social cohesion policy should be envisaged:

– A labeling system, similar to that used for energy efficiency could be created to warn of the presence of microwaves or EMFs. It would give the device’s transmitting power, specific absorption rate and any health risks connected with its use.

– Prohibit all publicity that is intended to market mobile telephones to under fourteens.

– Prohibit free toys or gadgets for under fourteens that resemble mobile telephones.

– Require each mobile phone sold to come with an accessory that protects the user’s head from exposure to EMFs during calls.

The EESC suggests that particular attention should be paid to “electrosensitive” persons suffering from an EMF or environmental intolerance syndrome and measures should be introduced to protect them, such as recognition of the illness in the following sectors:

– Health sector: recognition of the illness of electromagnetic hypersensitivity as an EMF intolerance syndrome.

– Employment sector: recognition of hypersensitivity as an illness and adaptation measures.

The EESC suggest that:

The EESC also recommends that systems for evaluating, preventing and managing EMF risks in the workplace need to be improved through the proactive adoption of appropriate measures to mitigate, neutralize or eradicate it wherever necessary.

Information measures could include:

– Establishing a register of products with EMF risks showing their potential for causing electromagnetic hypersensitivity.

– Information and awareness-raising campaigns on the prevention and management of problems associated with the condition that target people with “compatible profiles and particular long-term vulnerability” and explain the potential long-term risks.

– Raising awareness of the potential health risks of DECT wireless phones, baby monitors, and other household appliances that continually emit microwave pulses, such as electrical equipment that is left permanently on standby, and recommending the use of fixed corded telephones at home.

Rules concerning the planning of electric power lines and relay antenna base stations (cell towers) should be established by adopting legislation on:

Other measures proposed include:

– Best practice guidelines should be drawn up in the business sector on EMF mitigating and on measures to prevent, manage or neutralise health impacts.

– EMF safety thresholds for the use of products should be regulated.

– Requirements for spatial planning tools should include public and private EMF-free zones or “white” zones, which would have to include housing, and public spaces that are free of electromagnetic pollution, including health centres, hospitals, libraries, workspaces, etc.).

– Measures to address the private use of mobile phones, DECT-type cordless phones that are not Full Eco, Wi-Fi systems, WLAN and WiMAX for computers and other wireless devices such as baby monitors.

– The default mode on devices for wireless systems should be “off”.

The EESC document I have reviewed above was published in December 2015. To access the complete version of the document click here.

Why Am I talking About this?

Many people feel trapped by EMFs as if there’s no escape, no way out. They get overwhelmed by EMFs, what EMFs are doing to them and what they are doing to the world. I’m talking about this because despite what many people think and feel, there is a way forward.

This paper is very much ‘work in progress’ it’s a draft and so will be subject to change. But it shows that as a society there is a way out, a way forward and that there is a movement towards this.

These measures may not be adopted for some time but they are on the horizon. In the meantime if you are suffering from EMF exposures you need to do all that you can do to get your life back on track and deal with EMFs. Personal solutions remain my focus. This is the information I will continue to share.

Don’t wait for society to solve these issues for you. I didn’t. And don’t get wrapped up in all the negativity. I don’t.

Your comments are welcome below.

Update 10 February: To read the final draft of this document click here.