He was lunching in an Indian restaurant with a work colleague.

Then half-way through the meal…..bam.

His body started convulsing violently, uncontrollably and he lost consciousness.

He had a 45 minute “Grand Mal” brain seizure. They rushed him to hospital in an ambulance where the doctors told him he had a massive brain tumor.

He spent the next 8 days in intensive care fighting for his life.

Fortunately the MRI scan showed that the tumor was operable, but the doctors told him if they didn’t operate immediately it might be fatal.

After a grueling 12 hour operation the tumor was removed, a couple of days later he left the hospital.

During the post-surgery follow up there was one question and one question only on his mind, “how did I get this thing?”

He’d never heard of getting a brain tumor from food poisoning before but he was ready to believe anything.

Anything except what he was about to be told.

The neurosurgeon turned to him and replied, “perhaps electromagnetic fields.”

Why Was He So Stunned?

Because he thought he knew all about EMFs.

Immediately he started looking at the studies again

This being 1995 there were few studies on cell phone radiation. But he discovered from electrical utilities, the Electric Power Research Institute in particular, that there was a statistically significant risk for brain tumors from electric fields and for leukemia.

“Being a little naive at the time he said to himself, ‘well if this is in the science paper, why doesn’t the public know?’”

Now he knows why, “science is necessary but not sufficient. Until you can put it into the public domain it doesn’t really matter. It matters only within this small club that we call scientists, but the public has to know what the science says and that is what has been suppressed so far.”

For the last 20 years he’s been busy putting the science into the public domain, and that’s what he’s doing next Thursday as my next interview guest. 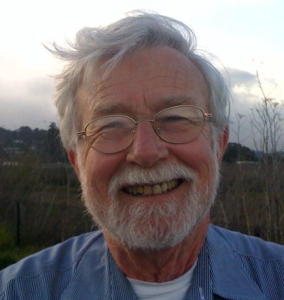 His name is Lloyd Morgan and he’s now senior research fellow at the Environmental Health Trust.

Next Thursday July 10th at 1:00 p.m. EST (10 AM PST or 5 PM GMT) Guy Hudson is my interview guest. – See more at: https://www.electricsense.com/8395/emf-protection-physicists-approach/#sthash.SLQwYkrh.dpuf

– before the day, by clicking here and sending me your question

– on the day, by putting your question directly to my guest

This interview has now been broadcast. You can access the MP3 download and transcript of this interview here https://www.electricsense.com/interviews-emf-experts-offer/