The question that begs to be answered here is…. Is there a certain stone or crystal that can protect you from EMFs?

Stone therapy, or lithotherapy, was developed into a branch of homeopathy in France in 1965. But the French did not invent healing with stones. Early civilizations used stones for healing in lots of ways; in ceremonies or rituals, in powders and elixirs, by wearing them or carrying them on the body.

Studies on Stones and Healing

Other studies have found that electromagnetic radiation from crystals affect these biophotons. Energy from the crystals were found to make changes in brain patterns when stones were placed near or laid on the body (Institut für kinesiologische Pädiatrie [Translation: Institute for kinesiological Pediatrics], Dr. Kühl, Reutlingen).

“[Stones] emit measurable frequencies of radiation in the range of infrared and ultraviolet, as well as of visible light. And although radiation from crystals is of a low intensity, because of its regularity and duration it does have great effect! For comparison, imagine a vibrating guitar string, which can barely be heard in a room, but that sounds beautifully loud through the medium of the guitar’s wooden body. Analogously, the weak radiation of a crystal may at times cause a strong reaction in our organism.”

We are electrical beings. When the radiation of a crystal comes into contact with the human body, it impacts it on many different levels.

On a cellular level. The crystal affects the metabolism of the cells, tissues and organs when the metabolic exchange inside cell membranes is stimulated electromagnetically.

On an energetic level. The crystal affects the energy flows of the meridians and the chakras.

So the effects are profound, but they are only profound where the crystal comes into contact with like frequencies. This will happen when the energetic properties of the mineral substance are similar to those in your body. Where similar substances, particles or structures are able to vibrate this is called “resonance”.

The late Marcel Vogel, a senior scientist at IBM for over 27 years theorized that crystals are capable of amplifying and directing the natural healing energies of the body so that they become more focused and powerful, similar to a laser.

Which Crystal Is Best For EMF Protection?

Given what we know about resonance, clearly there is no one stone or crystal that can offer better protection from electromagnetic fields than any other stone or crystal. Healing with crystals is an intuitive process.

Black Tourmaline is reputed to offer protection from electronic equipment. But its not about going out and buying black tourmaline to protect yourself from EMFs. Black tourmaline might work for you but not for me, because of resonance.

Paul Martin has over 26 years of experience dealing with the healing properties of stones and crystals. In this short video he gives some wonderful insights into how stones can protect you and how to choose your stone ( a transcript of the interview is shown below). 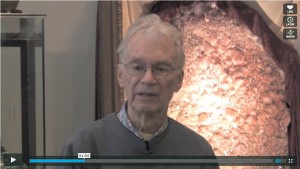 Interviewer: “Do you listen to the rocks and what do they tell you? Paul Martin: You know I suppose I do, when you’re talking about phenomenon such as listening to the stone-beings you are talking about a phenomenon that we all experience differently. I have a very deep reaction to these stones. On what level are they telling me something, on what level is that communication actually going on? I think it varies with the stone, it varies with the particular moment, varies with the opportunity, the issues involved etcetera.

Protective Stones And Their Energies

The same stone does not affect everybody the same way. For example this particular stone here that I have in my hand, you put it in my hand and had me hold, is a very interesting stone. It’s made up of a whole selection of crystals. These are light smoky quartz crystals; it’s been colored with a little bit of probably calcite. It evidently came from the Manchester area.

It’s an interesting crystal in that it’s terminated everywhere. These are all terminations; all these points are actual terminations. That means that energy flows and works in a whole variety of ways. More than that, this is totem quartz crystal, that is to say it has an animal representation to it. I think it looks like a lizard. It crawled out of the desert with a sandy back. It looks like a lizard head to me right there, for example. But I think that a lizard is well known to be able to withstand particular environments, lots of hardship, it has learned whatever lessons that you learn from living in the desert.

So I think it carries a lot of aspects. This can work as a protection stone, for example, for the two of you on your journey. I see it as leading you into places you have never been before, and being the protection that allows you to be free about going there. So I think it’s an important stone for you. I’d love to have it. It would enhance my shop, that’s for sure, it’s an interesting stone.

That’s quite an honor for you to say that to us, because the stones you have in your shop are absolutely amazing. Well it’s a result of 26 years of having access to the world’s finest stones. I’ve been successful for 26 years in attracting those stones that make a difference. The message that people get from the stones, I mean this is like everything in the world has an energy field. I feel like yes.

And each of those has a specific vibration. So every single stone has its own special vibration. That’s why different people are called to a different stone, because it’s in alignment with what their vibration is. Absolutely and that particular vibration is when a person comes in here and they can walk through not notice many extraordinary stones, but all of a sudden they are attracted to a particular stone. That sense of attraction is intuitive intelligence, as far as I am concerned. And it’s the most important thing that happens here and maybe a lot of places in life; paying attention to that sense of attraction because it’s your right brain, your intuitive intelligence is communicating.

It’s something you can’t fake, that sense of attraction is real and when a person comes in, if they are attracted to something then they need me to help facilitate what ensues. So I’m a dealer of these metaphysical tools for a wide variety of people, using them for a very very very wide variety of purposes.

How To Use Crystals For Healing

I recommend going to a shop to purchase your crystals in person instead of buying them on the Internet. You need to see them and feel them before you purchase. As you allow the stones to interact with you, you will understand the right stones to choose for your healing. Take your time, start out with a small selection so that you can acquire your collection progressively.

This is how I acquired my collection of crystals.

Here are some of the ways that you can use crystals for dealing with electrosensitivity or other health conditions:
1. Put the stone where you are in pain or hurting. Concentrate and tune into the stone. Let the healing take place, feel it working.
2. Use stones to bring harmony to your chakras.
3. Put the stones in a geometric pattern. Sitting down or laying, use your intuition to place your stones around you in a certain order.
4. Use stones around your home and office. In my office I like to have a Topaz stone. Experiment and see which stones you benefit from having around you.

What About Shieldite And Shungite?

In The Orgone Accumulator Handbook According to Wikipedia, “Shungite is a black, lustrous, non-crystalline mineraloid consisting of more than 98 weight percent of carbon. It was first described from a deposit near Shunga village, in Karelia, Russia, from where it gets its name. Shungite has been reported to contain fullerenes.”

According to iyashisource.com, “Shieldite is a very rare mineral made of silicate and crystalline carbon with a unique molecular structure which is not to be confused with other regular carbon based minerals. Shieldite forms in clusters of 70-80 carbon molecules which create capsules (called fullerenes).”

Which leads me to conclude that these are different stones that have similar properties. Do these stones have special properties? I’ve never come across any Shieldite locally so I can’t comment on it. But I did buy a Shungite pendant a few years ago. I tried wearing it for a few weeks. I didn’t feel I had any affinity to it or feel any benefit from it.

What About Orgonite For EMF Protection?

In The Orgone Accumulator Handbook, James DeMeo, PhD, tells the story of how orgonite came in to being.

In the 1940s, the physician Dr. Wilhelm Reich claimed to have discovered of a new form of energy which charged up living organisms and also existed in the open atmosphere and in high vacuum. He called this new form of energy orgone.

Dr. Reich’s research showed that this energy could be photographed and measured and had powerful positive biological effects. He trained other scientists and physicians in his findings. They set about applying the orgone treatment methods using a device called the orgone energy accumulator, against different illness, including cancer, with apparently very good results.

Not surprisingly Reich’s findings shocked the scientific world of his day. This lead to numerous smear articles in the popular press, and charges by the Food and Drug Administration. A trial was held where it was declared “orgone energy does not exist” and the US Courts ordered all books on the orgone subject to be banned and burned. Sadly Reich was sent to prison, where he died.

A more modern term for orgone is scalar energy or scaler waves. The orgonite that’s sold on the Internet, typically made from metal and resin, and that’s talked about these days is derived from this work. It is controversial.

Does it work? Can it protect you from EMFs? I believe it does and can to some degree. BUT this should not form the basis of your approach to EMFs and neither should stones and crystals.

Being electrosensitive means that you react and perhaps “sense” man-made electromagnetic fields. Rather than focusing on what you can feel when around these EMFs turn your attention to stones and crystals, let their energy field resonate with you.