I became wise about EMFs a good while back.

Long before cell phones became the all singing, all dancing appendage they are today.

I got wise when one day I put a cell phone to my ear and felt intense pain.

For others it was the day their utility company installed a wireless smart meter on their home. 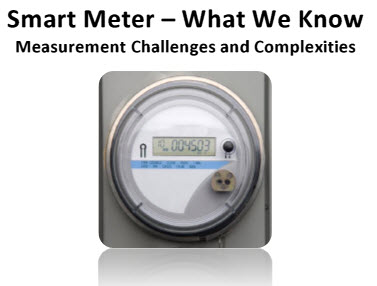 Or it was the day a new cell tower mushroomed in their neighborhood.

From that day on they are at war. Their utility company/cell tower company is their arch-enemy. Petitions, sit-ins, court proceedings, they stop at nothing to get the offending item removed.

BUT and here’s the big BUT, as much as I do sympathize when someone gets a smart meter or cell phone tower inflicted on them. What I also see is that they get so caught up in the injustice of the situation that they overlook the essential.

They just don’t get the EMF issue.

They just don’t get the all-encompassing, all-pervasive nature of it.

They think it’s just about the smart meter, cell tower or power-line or whatever other EMF hazard recently reared its ugly head into their life.

Take the smart meters for instance.

Most people only “get” that smart meter emits EMFs. They fail to realize that what’s just as bad if not worse, are the EMFs from all the smart appliances which are in their home, which communicate with the smart meter and thereby liberally radiating you and all the other occupants of your home in the process!

For other people, their enemy number one is the cell tower at the end of their street. I understand the outrage that people feel when a cell phone tower springs up outside their home radiating their home, garden and entire neighborhood and they are powerless to do anything about it. Or when they see new antennas being fitted to an existing cell tower.

But here’s the thing: these are all external sources of EMFs.

They are outside. The source is not inside your home.

This is no small detail. Because ‘distance to the source’ is crucial. That’s to say how far away you are from the device (source) which is emitting EMFs is a key factor in determining your exposures.

It’s a key factor because of a rule of physics called the inverse square law. This says: the strength of an electromagnetic field is inversely proportional to the square of the distance from the source.

In other words, if you move your bed twice as far away from your smart meter, you get one quarter the radio frequency radiation. Move it three times farther, you get one-ninth the RF exposure.

So yes, cell towers and smart meters and power lines and the like are a problem. But often, very often, people fight to have a smart meter or cell tower removed when their exposure to EMF sources in the home far exceeds what they are being exposed to from outside the home.

Rather than looking at their overall EMF exposures they are obsessing about one EMF issue. And it’s often the wrong one.

What’s important is to understand the facts.

As far as these external sources of EMFs are concerned the facts tend to get forgotten. They get drowned out by the, “what right have they”, the injustice of it all.

There is a right way and a wrong way to go about this.

And this is what I intend to do.

If you’re looking for something to buy which is magically going to make EMFs safe, you’ve come to the wrong place.

But I can show you the right way.

If you are interested in learning the facts you’ve come to the right place.

If you’re interested in solutions and learning how to deal with these EMF exposures you’ve also come to the right place.

Step 1 is to sign up to my Free EMF Protection Report.