Who would have guessed that high levels of electromagnetic fields (EMFs) could be emanating from your printer even without a WiFi router in your home?

This is a very common issue.

“Elizabeth Jesse, a former neighbor of ours in East Lansing, MI, on May 28, 2016, brought a new HF 35C HF Analyzer to our home and checked for high radio frequencies (RF). Her husband Jack accompanied her and recorded the pictures throughout this report.

Most of our home was cleared from radiation back in the early 2000s when David Stetzer, an expert electrician from Wisconsin, used a Graham-Stetzer Microsurge Meter to find the ‘Dirty Electricity‘ and then filtered it with Graham-Stetzer Filters. Because his time was limited there was one spot near our refrigerator that he was not able to filter.

When Elizabeth measured throughout the house, again she noted a hot spot near our refrigerator. She traced it into our office and discovered it was coming from a HP Printer that had been turned on. The HF Analyzer measures in micro watts per square meter. When the number goes to ‘1’ at the far left of the display window (as it does in the picture at the right), it means that the meter has maxed out and the reading has gone above 1999 micro watts per square meter. 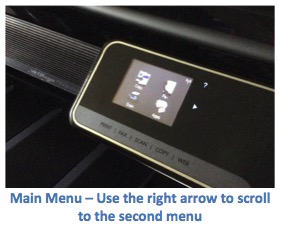 Elizabeth was aware that even though we did not have a WiFi Router in our home that the printer emits high levels of radiation until the WiFi feature on the printer is turned off. She led us through the following steps on our HP Officejet 7500A Wide Width Wireless Printer.

Turn the printer on and the Main Menu will appear. 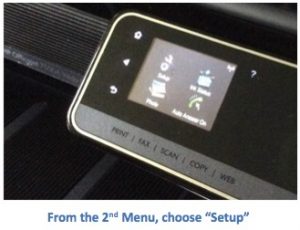 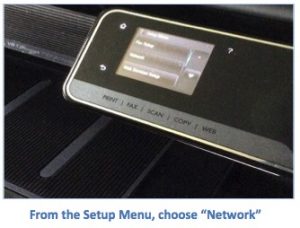 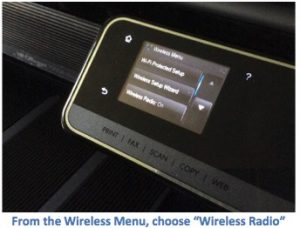 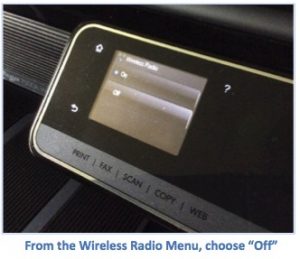 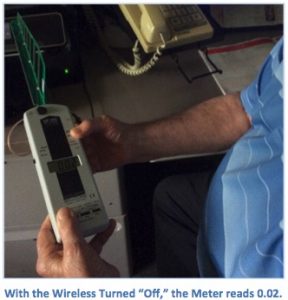 We were very happy to have our room be free from the ‘Dirty Electricity’, clear out to the refrigerator in the next room.
We hope that our findings will be helpful for you!”

Be Safe – Turn the Wireless Off from your printer!

As I mentioned this is a very common issue. And it’s common problem with pretty much any device which has wireless functionality, even if you’re not using the wireless!

Laptops and desktops come to mind first. My desktop, for example, has both WiFi and Bluetooth functionality which I can deactivate by going into the software. But with the introduction of smart appliances throughout the home, all kinds of previously innocuous devices are now being equipped with RF power transmitters which can emit radiation radio frequency radiation into your home 24/7.

The idea is that these appliances connect up with your smart meter to form a smart network which communicates energy usage data back to the utility company wirelessly.

RF radiation from smart appliances which there are more and more of in our homes is another big concern.

Thanks again to Dr. Hillman for sharing this information.