Most people are not that good.

They’re too attached to their cell phone, cordless phone, WIFI, etc. to bring about any significant change.

Because at some point making any significant changes in your life means making sacrifices.

That’s why what I’m sharing today is going to interest you, particularly if you use a computer.

Because you don’t have to give anything up, it’s free and it will make your computer less carcinogenic.

There’s lots you can do in the way of EMF protection. Sometimes it’s difficult to know where to start.

But there’s one aspect that you need to pay particular attention to.

It’s a golden rule: minimize exposure to all forms of EMFs in the two to three hours before you sleep.

This is important for a variety of reasons, but top of the list is melatonin.

It’s a hormone produced in the pineal gland located deep within the center of the brain. Studies tell us that exposure to EMFs around bedtime can severely inhibit the production of melatonin.

Studies also tell us melatonin controls or influences bodily processes in many ways:

Artificial light at night can inhibit the production of melatonin. This might sound unimportant but it’s extremely dangerous.

So dangerous that the IARC (International Agency for Research on Cancer) has classified light at night as a class 2A carcinogen. This places it on the same level of severity as the effects of tobacco smoke on lung cancer.

Light At Night Can Lead To Sleeplessness And Disease

According to studies light exposures at night can disrupt your circadian rhythm which can lead to sleeplessness and disease in the long run.

Your circadian rhythm is like a 24-hour internal clock that runs in the background of your brain that cycles the body between sleepiness and alertness at regular intervals primarily in response to light and darkness.

What Can You Do? 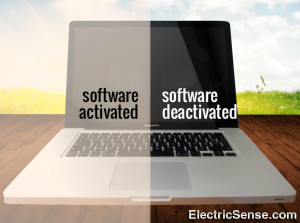 Besides being careful about your EMF exposures you need to pay particular attention to your nighttime light exposures.

The healthiest forms of lighting are traditional incandescent lights. The healthiest color for nighttime is lighting which gives off a yellow/orange/red tinge. The best is red, though it’s not the most practical.

In 2012, the American Medical Association’s Council on Science and Public Health made this recommendation:

“Exposure to excessive light at night, including extended use of various electronic media, can disrupt sleep or exacerbate sleep disorders, especially in children and adolescents. This effect can be minimized by using dim red lighting in the nighttime bedroom environment.”

But beyond just lighting you also need to be careful about your light exposures from other sources.

I’m talking about computers and tablets. More and more people use computers at night, to work, to play games, to watch films. Research suggests that because these devices emit a blue light they may be particularly harmful to our health.

There is a solution for this.

You download the software to your computer and it automatically adapts the color of your computer’s display to the time of day. It filters out the blue light on your computer monitor intelligently making your display a warm orangey color at night and leaving it bright and unfettered during the day.

Once you’ve downloaded the software it appears as an icon in the menu bar at the top right of the screen.

Then you click on the icon and a drop down menu appears. Choose preferences and it opens the window below. Once you entered your location you can leave it on auto and it dims the brightness automatically on your monitor. 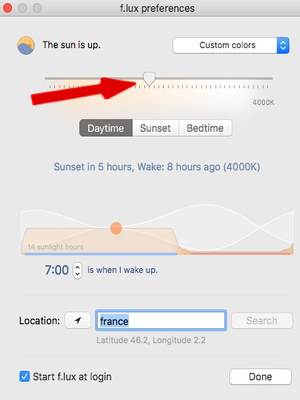 I’ve got sensitive eyes so I like to dim it more than the standard setting, which you can do by dragging the slide bar (as shown by the red arrow above).

You can download the software for free from this website https://justgetflux.com/ It exists for both PC and Mac and it’s free.

I’ve tried other software which makes the screen a deep red. It might be effective but it also made my screen very dark. Too dark for me to look at comfortably.

I recommend the f.lux software, it’s free and easy to install. I find it makes my computer monitor easy on the eye and it doesn’t slow down my computer.

For those of you that are really not walking the talk you’ll be glad to know there’s also a version for iPads and iPhone’s.

For 10 tips on creating a low EMF bedroom click here.