EMFs are dangerous, you know that. Right?

But what EMFs? And what are EMFs anyway?

Have you ever tried explaining any of this to a friend?

Say ‘electromagnetic fields’ and its even worse.

OK, so what about explaining it in terms of everyday appliances? Things that emit EMFs?

But what about the electricity running through the wires in your home?

Could that be another source of EMFs?

Our lives are built around the use of electricity. Government and industry say its safe. It must be safe.

Not according to Sam Milham MD,MPH, here is what he says: 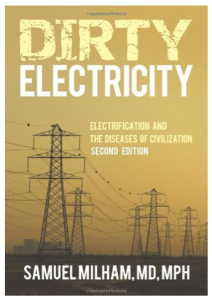 “There is a high likelihood that most of the twentieth century “diseases of civilization”, including cardiovascular disease, malignant neoplasms (cancer), diabetes, and suicide, are not caused by lifestyle alone, but by certain physical aspects of electricity itself.”

This is a bold statement for anyone to make. But when you know it comes from the mouth of one of America’s most noted epidemiologists of the last 50 years, it does get you thinking. It got me thinking anyway.

To think that the electricity running through the wires in your home could be dirty or dangerous is a frightening thought. But it wasn’t fear that I felt when I read this book for the first time. It was more relief.

Relief because it confirmed what I already knew to be right.

I discovered dirty electricity because I felt unwell in my own home. My body was telling me something was wrong. I had already got rid of my cell phone, cordless phones etc. So what could it be?

When someone explained to me that maybe dirty electricity was behind what I was feeling I didn’t need any convincing to go out and buy a microsurge meter. And I’m glad I did.

Dirty Electricity: Electrification and the Diseases of Civilization is a fairly short book (104 pages). But it packs a powerful punch.

Its powerful because this is not some dry academic account. Sam Milham shares his story. And what a story.

He was born in The Albany Hospital, in Albany, New York. Ironically he later attended medical school in the same building he was born. He became interested in epidemiology (the study of disease in populations) while running a baby clinic and a VD disease clinic.

He first started investigating leukemia in populations in the 1960s. The Lancet published a query asking for information on leukemia clusters. He was finally able to show that the childhood leukemia peak was linked to residential electrification. It took him 40 years!

In the first six chapters he recounts his career. His internship, residency, his time at the New York Health Department of Health and then his work at the University of Hawaii and the Washington State Department of Health. He studied leukemia in electrical workers, in amateur radio operators, EMFs in radial tires, cancer in firefighters and office workers.

Sam Milham should have been enjoying a peaceful retirement when he became involved with La Quinta Middle School (LQMS). Just as well. For him it became a career defining moment and for the rest us it gave concrete proof about the adverse effects of this dirty electricity.

He saw an article in his local newspaper recounting the incidence of a cancer cluster, 11 cancers in all, in a nearby school. He decided to study the data, with the help of Dr Martin Graham and Dave Stetzer who had developed a device (microsurge meter) for measuring dirty electricity. He found a positive correlation between dirty electricity exposures and cancer.

Sam Milham goes on to outline his concerns regarding EMF exposures from stray currents, radiofrequency radiation, radar facilities and other diseases. He suggests that Lou Gehrig’s Disease (amyotrophic lateral sclerosis) may be caused by elevated EMF exposures.

Other Reviews Of Dirty Electricity

‘Everyone concerned about health issues beyond contagious diseases should read this short and highly readable book, then each reader should pass on to their friends, what an important book Dirty Electricity is.’
Lloyd Morgan, Senior Research Fellow of the Environmental Health Trust

‘Sam Milham is a world-class epidemiologist…… After a long, productive career….Sam is now on the trail of another invisible agent that he believes is causing an epidemic of many different diseases, most especially cancer. He is convinced that they are caused, at least in part, by EMFs and especially by high-frequency transients (little bursts of electromagnetic energy) or what he calls dirty electricity.’
Louis Slesin, Microwave News

‘Dr. Milham shows how the increase in childhood leukemia and the diseases of the post-industrial age (depression, suicide, heart disease, diabetes and cancers) are associated with electrification. Sam Milham should receive a Nobel Prize for his research and his discoveries as he was among the first to document the biological and health effects of electromagnetic pollution.’
Dr. Magda Havas, Associate Professor of Environmental & Resource Studies at Trent University

There’s no point in pretending this problem doesn’t exist. It does exist.

What can you do? You need to get wise on this subject. Read this book.

Sam Milham talks about how important it is that more studies are done on this and how buildings, devices and infrastructure that create these EMFs should be re-designed. Dimmer switches, computers router/modems, TVs, CFLs are all possible culprits.

An ordinary portable AM radio can help you detect dirty electricity in your wiring a microsurge meter can help you to measure it. You can then either eliminate these culprits or install GS filters.

For more information on how to deal with dirty electricity click here.