Cornet ED75 EMF meter review – in an ideal world you would have one EMF meter that could “do everything”.

It would be pocket sized, not too expensive and easy to use.

Unfortunately, whether its EMF meters or anything else as soon as you start to look at the nitty gritty, you realize that the ideal world doesn’t exist.

I have just tested the Cornet ED75 EMF meter. It doesn’t do “everything” but for the money, it does quite a lot….

This video gives a brief overview of its features:

What Are The Technical Specifications of The Cornet ED75 EMF Meter?

The technical specifications of the Cornet ED75 are the following:

Mmm this sounds all well and good, but what does all this mean in plain English?

Having a meter that is capable of measuring EMFs at different frequencies is no new invention. The Trifield TF2, for instance, which has been around for a good for few years, can measure AC magnetic fields, AC electric fields and radio frequency (RF) radiation. True, but the Trifield has its limitations in so far as RF radiation measurement goes. If you want to check your microwave for leaks or you are wondering what levels of RF radiation your cordless phone is throwing out the Trifield can do this kind of testing admirably. But if you are wanting to check the RF levels from a nearby cell phone tower or your neighbors WiFi the Trifield is soon…challenged.

Is The Cornet ED75 A Better Meter Than The Trifield 100XE?

If your main concern is RF radiation from things like: 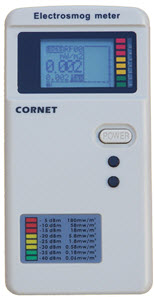 then yes the Cornet ED 75 is a better choice than the Trifield 100XE.

Its true you can measure radiation from lots of different sources (magnetic, electric and RF) with the Trifield but for measuring RF radiation the Cornet ED75 is a lot more accurate.

What About Magnetic Field Radiation?

The Trifield even with its two magnetic field settings measures radiation over a narrower range than the Cornet, only 0.2-100 mG as opposed to 1mG – 500mG with the Cornet . But don’t be deceived by this. Being able to take readings between 100 and 500 mG sounds good on paper but in terms of personal EMF protection it is likely to serve little purpose. 100mG is already a very high exposure level, generally long term exposures of 2 to 3 mG would be sufficient cause for concern, let alone 100 or 500mG. Being able to measure levels as low as 0.2mG, as the Trifield can, is much more useful.

Advantages of the Cornet ED75

– its range in RF mode, it can measure up to 6GHz (even to 8GHz with less precision according to the manufacturer)

– its sensitivity in RF mode, smart meter radiation can pose a problem with certain meters with slow refresh rates, this is really not a problem for the ED75

Disadvantages of the Cornet ED75

– it takes a while to get the hang of using it, the screen presents a lot of information which can take time to comprehend

– it does not have an audio output jack, you can’t “hear” the radiation

– it is a single axis meter

As far as it being a single axis meter, in the measurement of magnetic fields this means you have to orient it in different directions to get a true magnetic field reading in a given location. There is no denying, the Trifield is much easier to operate in this respect.

But for measuring RF radiation a single axis meter is not necessarily a disadvantage. By turning the meter in different directions it can allow you to locate the source of the radiation.

On Balance is the Cornet ED75 A Good meter?

– it can measure RF radiation in volts per meter. Obtaining readings in M/w² is fine for certain uses but if you are interested in getting accurate and meaningful readings of low level non-thermic RF radiation (which is the reason most people buy an RF meter) V/m wins hands down.

Here is a more detailed video on the meter:

Why Would I Not Buy The Cornet ED75 EMF Meter?

If you already bought the Trifield 100XE and the Cornet ED85EX (or the Acoustimeter) then sit tight this meter can offer you nothing that you haven’t already got. But if this is your first foray into EMF measurement and you are looking for one meter that can “do everything”, this is about as good as gets at the moment.

Where Can I Buy The Cornet ED75 EMF Meter?

Update April 2016: the Cornet ED75 is no longer in production and has been replaced by the Cornet ED88T model. The ED88T offers better functionality than the ED75 for both RF readings and magnetic field readings. It also measures electric fields For my full review of the Cornet ED88T click here.