Regarding the question of cell phones and cancer, children are without doubt the most at risk. I’m not the only one to take this view. Dr. Devra Davis of the Environmental Health Trust says “the weight of the evidence is clear, cell phones do cause brain cancer”. Let’s not forget, the International Agency for Research on Cancer has classified both microwave radiation and radio frequency radiation of the typed emitted by cell phones as a “possible” class 2B human carcinogen.

But the studies are not just linking cell phone radiation exposures to cancer they are linking them to a slew of other health issues.

Doctors and scientists from Harvard and Yale medical schools who this week convened at the Pediatric Academic Societies annual meeting in Baltimore are now warning pregnant mothers to be much more careful.

This new review confirms the concerns of the American Academy of Pediatrics. In 2013, the AAP, a non-profit professional organization representing the interests of over 60,000 members, wrote to the Federal Communications Commission (FCC) calling for more protective electromagnetic field exposure standards. In 2012 the U.S. Government Accountability Office had already voiced similar concerns.

The doctors and scientists which met at the Pediatric Academic Societies annual meeting advise that:

The Infant Brain Is Particularly Vulnerable

Doctors explain that the infant brain even while in the womb is especially vulnerable. Cell phones should be kept away from the womb especially towards the end of pregnancy – this technology can destroy our children’s health.

Strong Correlation Between WiFi And Autism

Dr. Martha Herbert, pediatric neurologist with Harvard University and Massachusetts General Hospital, has been studying the biological factors that are linked to autism and found a strong correlation with electromagnetic fields of the type emitted by WiFi. Calcium signaling in the brain, which regulates the flow of information to the cell membrane is disturbed by WiFi radiation exposures.

Dr Herbert explains “We are getting a triple or quadruple whammy between the biological effects, the psychological effects and the brain wave effects.”

She goes on to say “It is not inconceivable that it can cause (autism), but there are other factors that can play a role. It certainly can aggravate it.”

In one study, Dr. Hugh Taylor, chair of obstetrics, gynecology and reproductive sciences at Yale School of Medicine, put cellphones on the top of cages containing pregnant mice. He then studied the behavior of the offspring and found that they had decreased memory and were hyperactive.

Dr Taylor said “They were very hyperactive. They were bouncing off the walls without a care in the world.” He went on to say, “there is a correlation between cell phone use in pregnancy and behavioral problems in children.”

Dr. Catherine Steiner Adair makes the point that cell phones are really putting a strain on family relationships because the average mum or dad will check their phone 60 to 100 times a day.

A study published earlier this year found that a majority of adults reported that cell phones, computers and similar devices were significantly disruptive in their relationships and family lives.

Cancer Rate In Young People Up 40 Per Cent

New analysis of UK government statistics by researchers at the charity Children with Cancer UK found that the cancer rate in young people is up 40% in 16 years. There are now 1,300 more cancer cases a year compared with 1998, when the data was first published.

The increase is most apparent in teenagers and young adults aged between the ages of 15 and 24. Although some of the rise can be explained by improvements in diagnostic procedures and more screening, the majority is probably caused by environmental factors.

“Burnt barbecues, the electric fields of power lines, the electricity supply in your home. Hairdryers. It’s all of these things coming together, and it seems to be teenagers and young people that are most affected.” 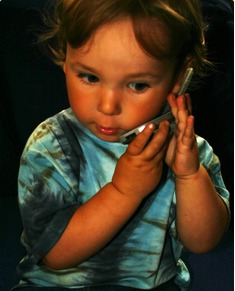 The Environmental Health Trust is calling on cell phone manufacturers and wireless providers to help fund research on these dangers. More studies are needed but as Dr. Davis, the trust’s founder says, “as a grandmother, I can tell you we have enough knowledge that we cannot continue to experiment on our children.”

Dr Herbert says “science is like a crossword puzzle you can make a judgment far before every last thing is straightened out.”

These new recommendations are a step in the right direction. Personally I take a more hard line on these exposures. For my cell phone radiation tips click here.