Some people are still confused about the dangers of cell phones.

The first thing to understand is that cell phones emit radio frequency radiation.

You’re not sure what this is?

Still non the wiser? This article explains more fully what it is.

There are numerous studies which link cell phone use to a long list of symptoms and serious diseases.

Where Are The Cell Phone Studies?

People say where are the studies?

Now, thanks to one of my readers, here in one place,

in one little downloadable PDF file, you can print out graphs and charts on 13 important cell phone radiation studies.

If you’re still on the fence about this issue, or you know someone who is on the fence and you want to get through to them what sticking a cell phone to their ear means in terms of their health, this little PDF spells it all out nicely.

Here is the link for the printout and below is my interpretation. Sometimes its nice to just let the facts speak for themselves….

The interphone study, published in 2010, which is the largest and longest study on the relationship between cell phones and brain tumors to date, found that:

How Long Before In High Risk Group? 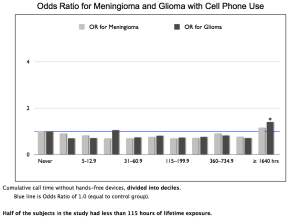 Images of the brain of a 5 year old, 10 year old and an adult reveal that children absorb far more RF radiation from cell phones than adults.

Data collected in 2000-2004 from different States in the US revealed that there was a strong positive correlation between the number of cell phone subscriptions and the incidence of brain tumors in the States. The correlation was found to be independent of income, age and population.

If the above has whetted your appetite then here is another great resource. This is a listing of 120 (the heading says there are 139 but I count 120) peer-reviewed scientific studies showing biological effects from RF radiation exposure of cell phones at levels below the recommended SAR levels. Click here for the link. The actual links in the document don’t seem to work, but they are correct. You can either type in manually the URL to find the study or do a Google search.

The study established a direct link between cancer deaths in Belo Horizonte, Brazil’s third largest city, with cell towers. Over 80 percent of those who succumbed to certain types of cancer resided approximately a third of a mile away from one of the hundreds of cell phone antennae that populate the city.

Looking at data from 1973-1988, a study was carried out in San Francisco to investigate how the risk of cancer was associated with the distance from the Surto cell phone tower that was built in the 1970’s. 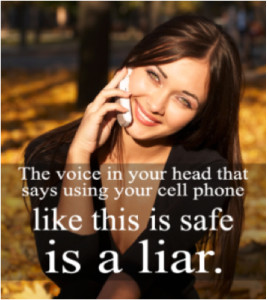 A meta-analysis of studies data on childhood Leukemia published in 2000 found that children were 2 times more likely to have leukemia if they had been exposed to more than 0.4 µT (microtesla) of electromagnetic frequencies. There was little or no increased risk of leukemia if the children were exposed to less than 0.2 µT of EMFs.