Most people when they go out looking for a Bluetooth headset, they have no concept of the radiation issue. So let’s get clear on the dangers of Bluetooth radiation.

A while back I received this message from Robert:

Lloyd,
You speak of three classes of blue tooth. And the lowest as being safe.

Would you list the make and models of category one
in your newsletter? (maybe 2 and 3 too) so that there
is no mistake on my part if I bought one. I’m illiterate
in this area and this is why I am asking. I suspect others are, too.
Thanks, Robert

I was initially a bit reluctant to cover this issue because I didn’t want to give the impression, in supplying information on different brands of Bluetooth headset, that in some way I was condoning their use. I’m not.

But I do live in the real world.

I know that there are probably many other people like Robert who want to carry on using Bluetooth but want to minimize the dangers; that’s to say their exposure to Bluetooth radiation. 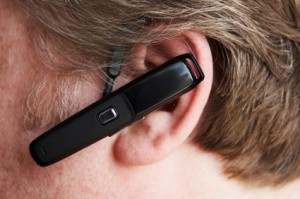 While I do spend a lot of time raising awareness about the dangers of cell phone radiation I don’t pretend cell phones are going to cease to exist or that people are just going to stop using them. Bluetooth and Bluetooth radiation is the same thing. I know that some people no matter what I (or anybody else for that matter) says will continue using Bluetooth headsets and Bluetooth technology.

So here is my answer for Robert and others that have concerns on this issue.

Bluetooth transmits at frequency levels in the 2.4 GHz band – the same as your microwave oven. That means we are dealing with electromagnetic fields (EMFs) – that alone should send some alarm bells ringing.

How Is Bluetooth Classified?

First a reminder on the classification system for Bluetooth because this is critical to minimizing your exposure to Bluetooth radiation:

Class I transmitters — are the most powerful and so emit the highest level of Bluetooth radiation. They can transmit up to 330 feet (100 meters) and have a peak transmission power of 100 mW (milliwatt).

Class II transmitters — are less powerful. They can transmit up to 33 feet (10 meters) and operate at 2.5 mW peak transmission power.

Class III transmitters — are the least powerful and emit the lowest level of Bluetooth radiation. They operate in a range of less than 33 feet (10 meters) and have a peak transmission power of 1 mW.

What Class of Earpiece should you buy to minimize your exposure to Bluetooth radiation?

So we are left with making a choice between Class 1 and Class 2 earpieces. One mitigating factor is that some Bluetooth headsets can reduce their radiation levels in cases where reception is good. This system, called power control, is largely standard for Class I and optional for Class II.

Obviously your preference, if you are wanting to minimize your exposure to Bluetooth radiation is to buy a class 2 Bluetooth earpiece.

The headsets listed below are all Class 2 Bluetooth devices:

The Bluetooth headsets listed below are all class 1 transmitters (the most powerful):

Are there any studies on Bluetooth Radiation Dangers?

As on the cell phone issue the cell phone industry have done a very good job of making the science look inconclusive and confusing. Added to which there have been few studies done specifically on the issue of Bluetooth radiation.

I have a friend who has a car with Bluetooth installed. A few years ago when I was experiencing fairly extreme electrical sensitivity symptoms, when I sat in his car with Bluetooth enabled, it would set off exactly the same symptoms in me as when I used a cell phone.

Bluetooth earpieces and headsets are particularly dangerous because of the proximity to the head of these devices when they are in operation.

Yes, I believe it can be. Let me explain.

If you are using a Class 1 Bluetooth earpiece or headset the dangers are very real:

Are There Any Alternatives To Using A Bluetooth Headset?

Besides just using a regular wired headset, yes, there are alternatives to using a Bluetooth headset:

2. Connect a retro handset to your telephone. The length of the cord means you are still in close proximity to your cell phone so you will still be absorbing some radiation. The manufacturers of the iPhone retro handset, claim that using their handset “reduces absorbed mobile phone radiation by over 95%“.

You might also want to read my article on low EMF airtube headsets.

I recommend steering clear of Bluetooth devices, but if you still want to continue using a Bluetooth earpiece or headset make sure you buy a Class 2 Bluetooth device (in the absence of Class 3 devices). For learn more about this important subject see my Bluetooth radiation article.