“I was the middle child out of five who could do anything my mind was set to do.

My parents would say “Beth, is our I CAN DO GIRL” I started as en entrepreneur in middle school selling my daily candy. In my mind I thought there was a demand for this service.

I had some friends whose boy friends got locked up in jail. Of course, they called me for help. Not that I knew so much I just had the strong personality of figuring things out with out being intimidated. While we were there I was taking mental notes on the procedure. I did ask the guy how hard was it to become a bail bonds person “ He said it very hard “ I said who governs this industry? He answered “ DOI”. I decided to follow through with calling and getting the info sent to me. I had a Great Aunt who passed and she told me I would be getting something use it wisely. I decided to use this for my bail-bonding career. I thought if I never take the risk I will never know the outcome. I became a bail bonds woman within the year. I worked this job for 13 years and was successful.

I always tell my children “Never be scared to Fail” if you do pick your self back up and use it as a tool in your toolbox for future endeavors. I decided to stop when my children were getting in there teenage years. I wanted to be able to attend their event along with all my sons games with no interference. I was very busy keeping my yard perfect and my house very nice from painting, plumbing, building a playhouse on stilts 12×12, changing carpet to making very nice scrapbooks and wreathes. I always could think of a project.

My nickname was “project girl” this gave me happy endorphins. I really enjoyed my family, as I was always the one they called for information. I did play the role of the middle child; according to the birth order book I was the glue that kept the balance together. Me, working at my restaurants with my employees was not a job, especially since I did not see this as work. I loved to make subs and keep my store very clean all day long. My employees would ask if I got tired of making subs. I would always tell them NO! I love it gives me a natural high.

Around the end of 2006 I noticed that my attention and desire was changing from being all that I could be, to I do not care. I was feeling like I was going crazy in my body. I was getting very sensitive and just feeling angry and annoyed. I was starting to get snappy and could not remember. I was not being able to remember numbers and this had always been my specialty. I would even miss my turns on the road. My daughter would say Mom what’s going on with you.

This went on for a couple of years getting aggressively worse. I got to the point where I could not even go to my store it just made me feel anxiety. I was starting to experience all these pregnant symptoms and would swell more while I was in the store; even my employees were getting a little concerned with how I was acting. The big day came when I literally felt my brain shutting down and my balance and all cognitive was not there. I am so amazed how I survived this nasty nightmare. I pray that my story will help millions around the world from getting as bad as I did by bringing awareness to be preventive.”

This is an extract from Beth Sturdivant’s book: ‘Backyard Secret Exposed: A Journal Of My Healing Path Back To Life’. 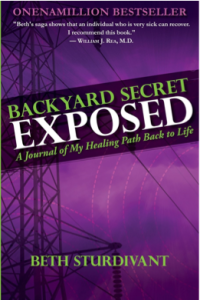 It’s a very moving account of Beth’s personal struggle with illness. It took her years to figure out what was behind her declining health.

What’s outstanding in this book is the level of detail. It really is a blow-by-blow account of Beth’s life as it get’s taken over by electrical sensitivity.

I know what electrical sensitivity feels like. I’ve experienced it first hand. In my case it hit me like a bolt of the blue one day when I put the cell phone next to my ear.

Cell phone next to ear = pain

No cell phone next to ear = no pain

It was that simple. I didn’t have to figure out what was making me sick.

For Beth, as is the case for many people, it was a gradual slide. She became forgetful, she couldn’t remember numbers, one night she got lost driving home on a road she’d driven on many times, she experienced sudden unexplained swelling and weight gain. These are just some of her symptoms.

It’s not easy to put into words how devastating electrical sensitivity can be, the physical pain, the financial hardship, the despair and the lack of support from loved one’s. Beth carries this off brilliantly.

Some of Beth’s symptoms were extreme. Just going into someone’s home with electricity could, and often did, cause her to retch on the spot, which would literally turn heads.

Electrical sensitivity turned her life upside down. She moved home and sold her beautiful Hummer SUV to pay for her medical bills. She consulted many doctors in different states, often taking plane journeys to get there and being physically ill in the process.

I don’t think I’m being unkind when I say Beth is not ‘a writer’, but her literary skills are not in question here. You want to know what electrical sensitivity feels like? This is the book to read.

Most people think electrical sensitivity/EMF sickness isn’t real, it’s something that only happens to other people. Beth’s book brings home just how big a threat electricity is to all of us.

Some Observations About Electrical Sensitivity

Some of my own observations about electrical sensitivity which were reinforced by what I read in Beth’s book:

– without perseverance you won’t get anywhere

– the importance of detox

– the importance of forgiveness and healing past emotions

– the importance/central role of the spiritual element in healing

Perhaps the most important ingredient is the power of belief. It wasn’t until I believed I could beat my electrical sensitivity that I did. But that didn’t happen overnight and it didn’t happen by itself.

I wish Beth well on her healing journey and with her book. At the time of writing she’s received 33 reviews on Amazon.com, 32 of which are 5 star reviews and one 4 star review.

You can buy Beth’s book on Amazon here.