The highly-anticipated Interphone Study will be published in the International Journal of Epidemiology on May 18th. The study has been much anticipated because of the scope and importance of its research. Scientists in over 13 countries have participated in the research. It is the largest and most costly (over $30 million) of any study that has ever been attempted to show the link between mobile phones and cancer.

I know Im sticking my neck out here, but there is no doubt in my mind as to whether the published findings are going to be representative of the truth, or will be censored because of potential damage to the telecommunications industry. I just know the Interphone study is going to be another big cover up. 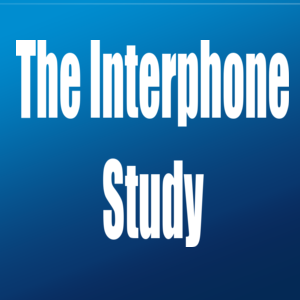 The study, coordinated by the International Agency for Research on Cancer (IARC), has resulted in numerous differences of opinion between the various researchers and the countries they represent. Could conflicting interpretation of the findings amongst the researchers have been fueled by interference from Big Business? *

The National Radiological Protection Board, in 2002 through 2005 issued a no-bones warning about cell phone safety: “If there are risks — and we think that maybe there are — then the people who are going to be most affected are children, and the younger the children, the greater the danger. Parents have a responsibility to their children not simply to throw a mobile phone to a young child, and say ‘off you go’.”

The Presidential Cancer Report gives compelling evidence from authoritative researchers, that those who had used cell phones heavily for ten years or longer had up to a three-fold increase in the risk of developing cancer than did those who used cell phones rarely. Still the report fails to conclude that there is enough definitive data to warrant regulation. Apparently more of us need to get deathly ill before the evidence that mobile phones cause cancer is deemed “conclusive”.

The 2004, the Europe-wide REFLEX Study reported that radiation from mobile phones mutated DNA in human cells that affected future generations. Yet this report did not conclude that mobile phones are health risks. We cannot help but wonder why? **

The corollary between cell phones and cigarettes has been gathering momentum. It is well known that Big Tobacco lobbied heavily against reports that would alert the public to the dangers of lung cancer from smoking. In like manner, funding for research into the health effects of cell-phone usage have been cut when the findings were not favorable to the industry that was paying for the research. Non-Industry funded research shows a definite link to cancer, while research funded by telecommunications reports no convincing evidence that EMFs in the environment are dangerous to human health. Is there something fishy going on here?

Dr Carlo Not Afraid Of The Cell Phone Industry

Dr. George Carlo, who believes cell phones are the greatest health hazard of our time, was hired by the Cellular Telecommunications & Internet Association to conduct their $28 million research program. His findings indicated a connection between deaths from brain cancer and cell phones. When he made his findings public he was fired. He claims that the International Epidemiology Institute is a money laundering vehicle, and that researchers are paid by the cellular phone industry.

In his book, Invisible Hazards of the Wireless Age, Dr. Carlo explains how “electropollution” from wireless technology is a potential threat to human health and can be the cause of cancer. He goes on to expose the cell phone industry’s desire to suppress the health hazards because of the risks of class action lawsuits, reminiscent of the days of Big Tobacco’s bamboozlement of the public.

He comments: “Am I calling out some very prestigious groups and openly showing their conspicuous unethical behavior, questionable integrity and disregard for public health? You bet I am. The Danish Cancer Registry,… the Journal of the National Cancer Institute, the Journal of the American Medical Association and the American Cancer Society have ties to the telecommunications industry that compromise their ability to provide meaningful information on this important public health issue. As sad as it is, this is a “follow the money” exercise that is yet another example of public health being compromised by industry subterfuge.”***

There are nearly 3 billion cell-phone users worldwide. At the current rate of expansion, it will take us two more years to add another billion. As we await the release of the Interphone Study’s official findings, it’s hard not to become jaded. Is this Big Tobacco all over again? Are you and I being deprived of the whole story about the serious illnesses that were supposed to be studied under un-biased conditions.

Is this one more case where you and I will be left holding the—potentially deadly—phone? Interphone comes out on the 18th May, lets see if I’m right.

*Interphone Results due out May 18th, Microwave News, accessed, May 11, 2010 http://www.microwavenews.com/

**Is there a Cell Phone Cover Up?, Green Living, accessed may 11, 2010http://www.greenlivingonline.com/article/there-cell-phone-cover

***Dr. George Carlo, Commenting on: The Latest Danish Cell Phone Study: Giving the Industry What They Paid For, In EMF Facts, accessed, May 11, 2010 http://www.emfacts.com/weblog/index.php?p=598

Cellphones and radiation: A review of troubling studies , accessed May 12, 2010 http://www.minnpost.com/healthblog/2010/04/23/17580/cellphones_and_radiation_a_review_of_troubling_studies#comments_section