Are you one of these people who uses a headset or Bluetooth device while leaving the mobile phone in talk mode inside your pockets? Well depending which pocket you carry your mobile phone in, that’s to say if its your trouser pocket, then there is a very real danger of impairing your fertility.

You thought using a headset such as a Bluetooth was safer right? Well you had better think again. Recent research suggests that cell phone dangers exist no matter where they are kept on or near the body.

A cell phone study conducted by Director of Reproductive Research at Cleveland Clinic in Ohio, Dr. Ashok Agarwal, indicated that cell phones that are carried inside trouser pockets altered the chemistry of semen.  When left in the talk mode, mobile phones appear to elevate levels of free radicals (disease causing molecules) in semen through radio frequency exposure.

Dr. Agarwal and his co-researchers used a model designed to approximate the effects of EMF radiation exposure of cell phones while kept in trouser pockets and left in the talk mode.  The sperm were exposed in vitro to radiation similar to levels from mobile phones and were then measured for changes. 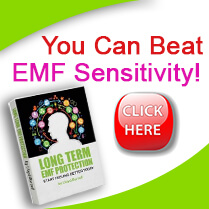 The evidence suggests that human cells exposed to the kind of radiation emitted by mobile phones, will become weakened.  Sperm cells will start to function poorly and that means that a potential decrease in male fertility. Cell phone danger to sperm function is very real. This research also implies that women are also at risk if they carry mobile phones in their handbags.

In animal tests Professor Olle Johansson has also identified a problem of irreversible sterility with exposure to electromagnetic fields which does not bode well for us humans.

I don’t carry a cell phone on my person anymore and I haven’t done for a long time. Although you may think you need to stay connected, whether in business or in your social life, I suggest you think again.  Is keeping your cell phone in your pocket really worth the damage its doing to your reproductive organs?

For 12 tips on how to protect yourself from cell phone radiation click here.