As a young guy in his early 20s Nick wanted to build muscle.

He started looking into nutrition and exercise, and then sleep hygiene and lifestyle.

Eventually he published his findings online by way of a website and newsletter.

But four years into this mission, publishing so many articles he felt frustrated.

He knew a lot of things on the surface but nothing really in depth.

Then one day he came across Dr. Devra Davis’s book Disconnect on cell phone radiation.

He listened to the audio book and became enthralled by what he learned.

Being so keyed up on health he’d been looking after himself for a couple of years now.

Already he was ‘cell phone wary’ not putting his cell phone in his pocket and that kind of thing.

But he admits, ‘I really didn’t know this topic back then’.

He simply didn’t comprehend the extent of the potential damage you can suffer from EMF exposures.

As he continued to dive deeper into EMFs he realized that most holistic doctors, didn’t even begin to understand the topic either.

All this made him feel quite anxious.

His coping mechanism was to read and research even more, to try and understand EMFs himself so he could tell his friends and family the truth about it.

He summarized all his findings.

He accumulated over 650 pages of notes, from reading books like Dr. Martin Blank’s Overpowered and Dr. Devra Davis’s book.

Reading the books and trying to make sense of it all himself, he realized, just how hard EMFs are for people to grasp.

Then came an idea.

‘You know what? I’m going to write a book about this.’

And so was born The Non-Tinfoil Guide to EMFs.

He admits to people telling him they didn’t like the title because it can be offensive to people with electrical hypersensitivity.

He say’s, ‘it was one was my fears because the last thing I want is to make it appear that these people are crazy. It’s actually the opposite’.

‘The truth is, the average person on the street thinks that this all sounds like ghost-hunting and crazy talk.’

To acknowledge that and to bring people into the topic with humor and with something very light, Nick wrote The Non-Tinfoil Guide to EMFs.

For my next guest I’m delighted to welcome author Nicolas Pineault. 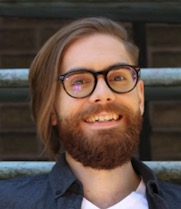 In 2017, he authored The Non-Tinfoil Guide to EMFs — which is an unconventional book that combines common sense and humor to tackle the very serious topic of electromagnetic pollution and its effects on human health.

Listen to my revealing interview with Nicolas Pineault and learn:

*****This interview has been broadcast – To access future interviews make sure you are signed up to my newsletter.*****