For 3 days only, I’m pleased to bring to you a FREE STREAM of Kevin Kunze’s acclaimed film MOBILIZE which explores the health risks and possible solutions to cell phone radiation – that means you can watch it for free from this page. Simply click RENT on the video below and use the promo code ” electricsense” to watch it online for free.

o If you prefer to own a DVD, I have made special arrangements for you to be able to purchase the film for only 7.99 + shipping (60% off the list price) using promo code ” electricsense” at http://disinfo.com/product/mobilize/. (The DVD is advertised at full price it’s once you get it in the shopping cart that you apply the promo code to get the discount.) 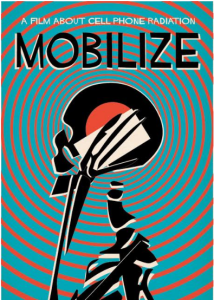 “Mobilize is an investigative documentary that explores the potential long-term health effects from cell phone radiation, including cancer and infertility. The film examines the most recent scientific research, follows national legislative efforts, and illuminates the influence that technology companies have on public health. Mobilize features interviews with numerous doctors, politicians, cancer patients, and technology experts.

I first became interested in cell phone radiation and public health when a friend of mine contacted me regarding his father, Alan Marks who was recently diagnosed with brain cancer after using a cell phone for over twenty years. While Alan’s story itself was tragic enough, it was the role that his cell phone played which intrigued me and ignited my journey across the country in search of answers. While pursing Alan’ s story and the deeper connection between cell phones and the human body, I learned San Francisco had been the first city in the world to introduce legislation that would have informed consumers about the safer ways to use a cell phone. Since the bill was introduced in 2010, over a dozen other nations have passed similar resolutions including England, Italy, and France. However, San Francisco’s bill was never implemented due to a lawsuit filed against the city by the cell phone industry. As I continued to interview more brain cancer and tumor patients, I became more invested in uncovering not only the relationship between cell phones and human health, but also in exploring the role that politics, media, and scientific funding have on public awareness. While concern about cell phone radiation and the long – term health effects are still largely unappreciated by the general public, I hope that as more impartial reporting and investigative efforts circulate the potential dangers will be impossible for an educated population to ignore.

Mobilize from TDC Entertainment on Vimeo.

The film was directed by Kevin Kunze and co-produced by Dr. Devra Davis, Ellie Marks and Dr. Joel M. Moskowitz.

The film features the following people:

Here’s an extract from the press release of the film:

1973– First hand held mobile phone invented by Martin Cooper for Motorola.
1975– Alan Frey, funded by the Office of Naval Research, publishes a study in the Annals of the New York Academy of Sciences stating that radio frequency (RF) radiation could cause damage to the blood-brain barrier.
1985– The first safety guidelines for radio frequency (RF) radiation, the type of radiation used by cell phones, is enacted by the Federal Communications Commission (FCC) to ensure people were not exposed to dangerous effects.
1993– David Reynard files a lawsuit against Motorola claiming cell phone radiation caused or accelerated the growth of his wife Susan’s brain tumor. The Cellular Telecommunications Industry Association (CTIA) along with the federal government pledged $25 million over five years to fund research on the potential health risks from wireless phones.
1996– In an interview with 20/20, Richard Branson tells reporters he doesn’t use a cell phone next to his head and compares it with cigarettes. A month after the interview, Branson forms the cell phone company. Virgin Mobile.
2000– The CTIA receive the final peer-reviewed research, which includes studies that show genetic damage and an increased risk for cancer. The CTIA merges with the Wireless Data Forum and becomes the Cellular Telecommunications Internet Association.
2008– Congressman Dennis Kucinich calls for a Congressional hearing to discuss the current research on cell phone radiation.
2010– San Francisco passes a “Right to Know” bill that will better inform consumers about cell phone radiation. The CTIA files a lawsuit against San Francisco’s legislation claiming it violates their freedom of speech as corporations.
2011– The California Senate Committee on Environmental Quality holds a hearing to discuss statewide cell phone safety legislation. The bill doesn’t pass the vote. A few days after the hearing, the World Health Organization (WHO) and International Agency for Research on Cancer (IARC) announced cell phone radiation is a “possible carcinogen.”
2012– The Italian Supreme Court upheld a ruling that there was a link between heavy cell phone use and a business executive’s brain tumor. The ruling could potentially open the door to further legal claims. In Florida, the Pembroke Pines City commission unanimously passes a resolution to encourage people to keep their cell phones away from their brain and body.
2013– President Obama appoints cell phone lobbyist Tom Wheeler, the former CEO of the CTIA, to be the Chairman of the FCC. Over the past two presidential campaigns, Wheeler raised $700,000 in contributions for Obama.