When Kathy was just 21 years old she suffered a grand mal seizure.

When she was 25 years old she accidentally walked in on her fiancé as he was committing suicide.

‘I walked in on his suicide and became the subject of the investigation…. it turns out he was involved in organized crime and I had no idea.’

In 1988, she was diagnosed with advanced cervical degenerative disk disease.

In 1994, she fell 12 feet from an unrailed bridge and suffered compound fractures and dislocation of her spine.

Hashimoto’s disease, fibromyalgia, but also electrical hypersensitivity, all these conditions form part of her story.

In January of 2016 AT&T installed a new alarm box with four antennas on the top of it.

The box was just two feet from her desk.

She started developing purple spots on her forearms, ‘like an elderly person gets’.

A few months later she got a new iPhone.

She’d had her new iPhone for about four weeks when one day she touched the screen and a pain shot up her arm that stayed there for two hours. 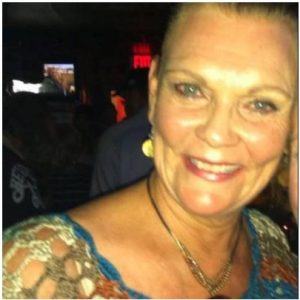 ‘When that happened, it was like my whole world changed. My body became immediately reactive to everything in my environment.’

Over a period of 18 months, she visited some 11 doctors who offered only dismal projections.

Kathy subsequently canceled all medical appointments and began seeking guidance through a spiritual approach, going through a wheelchair, to a walker, to a cane.

Today you can barely detect her injury history.

She says, ‘in retrospect, it almost appears that I came to earth to do what I’m doing…. I live in the U.S. we make up 5% of the population for the globe and yet we consume 70% of the global pharmaceutical market’.

‘The 2014 health statistics for the Social Index Report shows that we’re in the last place for life expectancy among other equally economic countries.’

Kathy is severely critical not just of the pharmaceutical industry but also of the church despite the fact that her father was a pastor and being introduced to religion at an early age.

At 9 years old years old she had a ‘significant spiritual experience’.

Kathy says, ‘I think that is what set me into the pattern that would determine how I would approach these health challenges’.

‘This EMF stuff is yet another warning…. we’re losing our connection with the Earth and with the Earth’s energies, those things that keep us healthy.’

Kathy Bates has achieved a significant improvement in her health and is able to live life again on her own terms. She’s the author of Getting Well God’s Way which is for sale on Amazon.

WARNING: if anyone that uses the word ‘god’ put’s your heckles up this interview may be a challenge for you. But this interview is crammed with EMF wisdom – which is why I wanted to interview Kathy.

Listen to my interview with Kathy Bates and learn:

*****This interview has now been broadcast. To access future EMF interviews make sure you are signed up to my FREE newsletter.*****