He first encountered electronics and wireless at school in the 60’s.

He thought it was “just brilliant”.

He became a radio amateur and used little walkie-talkies to talk to his school friends.

Not surprisingly he trained to become an electrical engineer.

In the 1980s he became involved with a protest group called Electronics for Peace (ECP).

NATO had decided to site nuclear missiles at Greenham Common, an American airbase in the UK. ECP were protesting (peacefully) against it.

The protestors, many of them mothers and grandmothers, claimed they were being zapped.

He went over and took some electromagnetic field (EMF) measurements.

There was no doubt about it. They were being exposed to pulsed microwaves from “funny things on poles around the periphery of the airfield”.

It was written up in the papers as a ‘zapping of some women on Greenham Common’.

In that age of EMF ignorance the public didn’t ‘get’ just how inhumane, dangerous and totally unjustified the treatment was.

Some years later he was talking at an industry conference on ‘Mobile Phones and Their Health Effects’.

On the second day, he happened to find himself sitting at the breakfast table with a very senior person at the Ministry of Defense.

They got talking about the Greenham peace protestors.

It turns out the MOD official had been sent to investigate the zapping of the women.

Then the MOD man leans over and says to him, “off the record, I was sent out there with some people and equipment to test this out. When we measured the fields, I wouldn’t let my men stand where the women were!”

He said, “it was bloody dangerous!”

Subsequently one of the women developed cancer, and a lot of them suffered fertility problems.

This was his first real eye-opener to the dangers of EMFs.

Then later on in the 90’s, he was working at a firm developing instruments for measuring water and soil in farmer’s fields for plant growth.

The instruments used a microwave frequency in the soil. He started to get headaches.

So he kept a diary.

It was clear, every time he was working on the project he would start to develop a headache 3 or 4 hours afterwards.

The headaches would last from like 12 to 24 hours. That was what convinced him.

He say’s “I’ve met a lot of people that are far more electricity sensitive than I am”.

He’s spent some 30 years studying the effects of EMFs on health. And has invented a number of popular EMF meters, including the Acoustimeter – which is still my ‘go to’ meter when I’m looking for a quick reading.

For my next interview I’m delighted to welcome the UKs leading expert on EMFs Alasdair Philips. 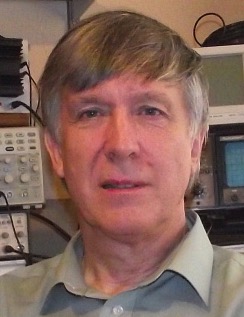 A professional engineer, scientific researcher and a founder of Powerwatch. Alasdair is seen by the UK Government and the electricity and wireless industries as a respected stakeholder and is recognized by the national media.

Alasdair has been a member of a number of UK Government and EC working groups on electromagnetic fields and health and has a wide knowledge of many other environmental health issues especially relating to the causes of childhood cancer. He has chaired and presented at international conferences on these topics. He is a Director of EMFields Solutions Ltd and designs their measuring EMF/RF instruments.

He is also a Trustee of Great Ormond Street Children with Cancer UK, the leading UK charity funding investigations into the causes and treatment for cancer in children and young people.

*****This interview has been broadcast – to access free EMF/health interviews make sure you are signed up to my newsletter.*****