He found himself living in an apartment across from a cell tower.

Soon after he started to experience acute symptoms. His physical, mental and spiritual health were profoundly affected. ‘Wiped out’ is the way he describes it. 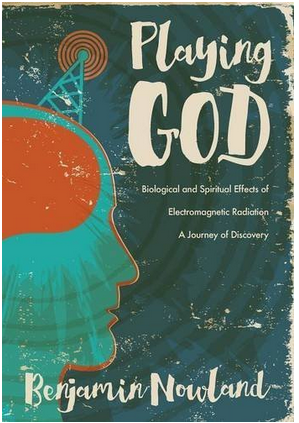 The only place he was able to function was away from Wi-Fi, cell tower antenna’s and mobile devices.

How could he be feeling this way? He began to search for the truth.

He started to ask himself, “what don’t the telecom companies and mobile manufacturers want us to know”?

He realized that the adverse health effects of Wi-Fi, mobile devices, and cell towers were not being shared with the public. He realized that microwaves were altering our DNA 24/7.

Using himself as the guinea pig, he started to study the effects of electromagnetic radiation. “I documented where I was, when I felt worse and what symptoms I was experiencing.” He substantiated his insights with research and during a two-year period spent heavily on products and mainstream and alternative therapies.

The upshot is his book, Playing God – Biological and Spiritual Effects Of Electromagnetic Radiation.

Ben Nowland intermingles a narrative which recounts his personal journey with science. He talks about being a ‘radiation refugee’ and encountering ‘The Hum”, a low frequency vibration which few people hear. The book is split into 6 sections:

He suggests that we are more likely to be disposed to RPS if we are one or more of the ‘four E’s’:

He explains that the Universe and all within it has an oscillation, a unique signature field and that the body-mind generates a non-linear waveform. The problem is that pulsed man-made EMFs produce a linear waveform. He compares how our body responds to microwave radiation to how we respond to discordant music, except that the consequences are far graver.

He speaks of the “possible deleterious effects of microwaves on the hypothalamic-pituitary-thyroid axis” which affects the levels of certain hormones.

Is This A Book About Healing?

In the last section of the book Ben talks about his recovery. He talks about the importance of EMF avoidance and detox and suggests that a heavy metal detox and candida cleanse may be beneficial, and that a liver and gall bladder cleanse is also recommended.

He suggests that the reader ask some questions, like how can I make the most of this opportunity? What are my glands and organs telling me? He also talks a little about chakra work, giving some exercises to do with the solar plexus and heart chakra.

This is the part of the book that interested me the most, but I’d liked to have seen more of this which is why I consider this book to be more of an account of one man’s journey with EMFs than a book about healing.