EMFs from power lines is not what you would call a hot topic.

This is what I would like to talk about in this article.

What Are Power Lines? 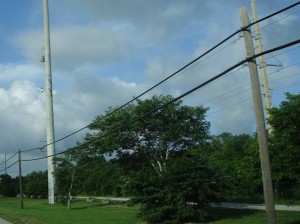 Power lines form part of a system called the ‘grid’. They are composed of two components, the cables transmitting the power, and the pylons or towers.

The cables strung between the pylons emit magnetic and electric fields. The towers themselves do not as they are shielded from the cables by insulators.

Power lines are the cheapest way to transport electricity from power stations to consumers.

Did you know that some power lines carry such high voltages that they emit high levels of EMFs (electromagnetic fields) for up to 1/4 mile on either side?

If you are in doubt as to the level of EMFs emitted from high voltage power lines watch this video:

What Do The Studies Say About EMFs From Power Lines?

Powerline EMFs have been linked to:

– heart disease, sleeping complaints and a host of other ailments.

Dozens of studies have found links between living near power lines and poor health:

– as far back as 1979 the Wertheimer and Leeper study found that children living near ordinary power lines had 3 times the likelihood of developing cancer….large gauge transmission lines are worse.

– the Wall Street Journal reported in 1993 that the real estate resale value of homes decreased by as much as 30%, if exposed to electromagnetic fields

– according to a 2005 study published in the British Medical Journal, babies who live near high-voltage power lines are almost twice as likely as others to develop leukemia during childhood

And yet despite this evidence people are still being subjected to EMFs from power lines which are installed too close to people’s homes.

What Kind of EMFs do Power Lines Create?

There are two types of electromagnetic field produced by powerlines.

– an electric field is always present when the powerline is switched on. It strength depends on the voltage.

– a magnetic field is caused by the electric current flowing in the line when people use electricity. This can vary considerably and is considered the most dangerous.

Electric fields are stopped by most building materials. The real problem with power lines are the magnetic fields.

Magnetic fields penetrate practically everything.The main factor that reduces magnetic fields is distance from the source. In other words the further away you can get from these powerlines the better. But if its your home that is situated too close to a power line this is not easily resolved.

The EMFs from underground powerlines are slightly different. The electric fields will usually be negligible because they are screened by soil, concrete, sand etc. But because underground cables tend to be buried close to the surface the magnetic fields at ground level can be high, except for the fact that the cables tend to be closer together than for overhead cables so the magnetic fields cancel out.

Can I Tell if a Power Line is Dangerous By Looking At It?

The width and size of the cables is a good indication of the voltage. But you can’t know the current flowing (what electricity people are drawing). And you can’t tell the configuration.

What’s the configuration? In your home, if your house wiring is not balanced, that’s to say the phase and neutral wires are not run together, this creates high magnetic fields. Similarly with powerlines, if the current on one side of the line cables is very different to the current on the other, this leads to much higher electric and magnetic fields than if both sides carried equal currents.

How Can I Know The EMFs Being Emitted From A Power Line?

The only way to know for sure what EMFs are being emitted by a powerline is to measure with an EMF meter. Your power company may be willing to do this testing for you. Then again your request my fall on deaf ears. In which case you can quite easily test your exposure by purchasing an EMF meter.

Measure the EMFs indoors and outdoors. Take measurements at different times of the day. Measure where you sit, and where children play.

Test with your electricity switched off at the mains, then again with it turned on, so you can determine how much of the EMFs are coming from the power line and how much from your own house wiring and electrical appliances.

What Are Safe Levels of EMFs From Power Lines?

If you are electrically sensitive this may still be much too high -the Building Biology guidelines recommend a much lower limit.

The first thing to do is to obtain reliable readings with an EMF meter (as described above). There may be no cause for concern. You may live in very close proximity to a power line but the EMFs may be negligible. Then again you may live at good distance but your exposure may be significant because of the very high voltages in the cables. Obtaining EMF meter readings is the only way to know for sure.

If your readings are high then you have two options. You can either shield or you can move out. Shielding will not be easy. Yes, shielding does work easily and well for the electric field element. Practically any sheet of metal, metal screen, or metal fencing, provided the metal is grounded will do the job.

But we can’t shield for these magnetic fields. Or that’s to say theoretically we may be able to do so, but the cost is typically prohibitive. Up until recently effective magnetic shielding meant using materials like Mumetal, which are very expensive due to their high nickel content.

A new magnetic field shielding film called Giron is now available which has the advantage of being much cheaper than Mumetal. Nevertheless the costs are still relatively high and shielding a whole house is difficult if not impossible – better to get in an EMF consultant for this kind of work.

Conclusion: EMFs from power lines should not be underestimated but your greatest danger may still come from other EMF sources.