Diabetes, alzheimers, autism, premature aging and their relationship to EMF exposure are all things I have talked about before.

Electrosensitivity (ES) is another one, very dear to my heart. But what about EMFs and Chronic Fatigue Syndrome?

What is Chronic Fatigue Syndrome? 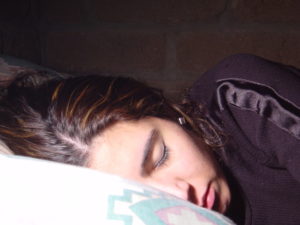 “[the] common name used to designate a significantly debilitating medical disorder or group of disorders generally defined by persistent fatigue accompanied by other specific symptoms for a minimum of six months, not due to ongoing exertion, not substantially relieved by rest, nor caused by other medical conditions.”

Some experts believe that because the symptoms of fibromyalgia and Gulf War syndrome can be so similar to those of chronic fatigue syndrome that all these illnesses may be one and the same. For simplicity I am going to use the term CFS, but you can take it to mean all of the above.

There is little agreement of what causes CFS. Most experts do agree that it develops from a convergence of conditions that may include the following:

But what if EMFs cause CFS? What if there are people that are being “labelled” as having CFS when in fact they are suffering from a reaction to EMFs?

Nobel Prize nominee and EMF pioneer Dr. Robert O. Becker, author of The Body Electric and Cross Currents, points out “chronic-fatigue syndrome has been found to be widespread in the electronics industry…”

Ryoichi Ogawa, a physician in Kobe, performed a study on CFS and noticed that about 80% of his CFS patients were frequent users on a daily basis of cell phones, personal computers, TV games and other IT devices. He found that “Reduced cerebral blood flow may possibly result from the influence of electromagnetic waves from IT equipment”

A study by Maisch et al, asked the question “is prolonged exposure to environmental level powerline frequency electromagnetic fields a co-factor to consider in treatment of CFS?” They concluded that although the link is not proven, sufficient evidence exists to suggest a causal link between ELF EMFs and cellular dysfunction.

Lucinda Grant in the The Electrical Sensitivity Handbook states “Other at-risk groups for developing Electro Sensitivity seem to be chronic fatigue syndrome (CFS) patients…. Because the nervous system is a primary site impacted by both chemicals and electromagnetic fields, those with nervous system damage from toxic exposures seem more susceptible to becoming Electro Sensitive too.”

If EMFs Cause CFS The Treatment Must Include Reducing EMF Exposures

The point is that if EMFs cause CFS, that’s to say if EMFs are creating hormone disruption and biological changes at a cellular level which in turn affects the immune system as long as the source of the EMFs is not addressed, treatment is unlikely to be successful.

That’s why I wanted to share this little talk with you by Paul Doyon. The cameraman needs a little more practice but the message is clear…..

Art Kab: “I am Paul Doyon and I’m an American. I was living in Asia for the past 22 years. 6 years ago I got very sick and I didn’t know what was causing it. I had Chronic Fatigue Syndrome. Chronic Fatigue Syndrome is an illness that started in 1984 in United States. It was known also as Myalgic Encephalomyelitis in the UK earlier than that.

But in 1984, which just happens to be the first year that they set up the commercial nationwide cell phone network is United States, is the year people started to get sick with what is called Chronic Fatigue Syndrome.

Initially the media called it the yuppie flu because it seemed that yuppies, who were the first people to have computers and cell phones, were the people most likely to get it. It’s 26 years later and they still say they don’t know what causes it. It took me 6 months to figure it out and I was able to cure myself of this disease. I’m one of the 3 % that does.

It’s a terrible disease and in people that get Chronic Fatigue Syndrome the 3 main causes of death are cancer, heart disease and suicide. Because so many people have it now, governments are trying to say that’s it’s all in your head, because governments are connected with the insurance companies.

I think they know what’s causing it and they don’t want to pay out money. So they are prescribing cognitive behavioral therapy and exercise therapy. Usually it doesn’t work, it makes people worse. People that don’t respond to prescription of this therapy, they throw them into the psychiatric ward and a number of people have actually died. But that is not what we are looking at with regards to the government and what they’re trying to do about the problem.

How many people here know somebody with a brain tumor, autism, Alzheimer’s, Chronic Fatigue Syndrome, cancer? I mean there are a lot of diseases: autism, ADHD, Chronic Fatigue Syndrome, and a lot of cancers coming up that we didn’t have 30 years ago. We didn’t have all these before wireless technology. And if you look at the research, connections can be made. A lot of people don’t want to look at the research; they want to maintain the status quo.

The cell phone companies are making lots of money, billions of dollars. They pay the government licensing fees, and there is a big denial that there is anything called Chronic Fatigue Syndrome, even though there are all these biological markers. Like adrenaline exhaustion, low natural killer cell counts, heart problems, free radicals in the body, going crazy. There are all these biological markers and they are trying to say that it doesn’t exist; now they are trying to say the same thing about electro-sensitivity.

A lot of people have electrosensitivity. They get sick when people around them have cell phones. They get sick when they get near the towers. After my little presentation, remember to watch a movie called Full Signal. It goes into detail, talking to experts and people that actually suffer from this problem.

I have electrosensitivity; some people in the audience here also have electrosensitivity. A lot of people don’t believe that there is a problem. Albert Einstein said, “Condemnation without investigation is the home of ignorance.’’ Some things are difficult to believe, I didn’t believe that radio waves, microwaves all this stuff could affect me. I had no idea; it didn’t ever cross my mind.

I was sick for 6 months before I could imagine that radio waves, microwaves, cell phone radiation could be affecting me. But then I considered it a possibility and because I did I was able to recover. It’s hard to believe because we don’t sense this with our 5 senses; we did not evolve to sense this danger.

EMFs Cause CFS and The Beginner’s Mind

But the more I researched it, the more information I got, and the more plausible it became. A lot of people are too quick to brush it off; Oh I don’t believe that is just science, that’s conspiracy theory, or you are a Luddite. They get these words on the TV and they are just repeating what they heard.

But in reality when you get the information, if you do research and you gather information it becomes more plausible. There is a Buddhist monk in Japan that said, “In beginners’ minds there are many possibilities, in the expert’s mind there are a few.” I don’t consider myself an expert on this topic, but I have been researching it for about 6 years and I know a lot more than the average person. So I hope I can share some of that knowledge with you tonight.

If EMFs cause CFS or even if they are only one causal factor, I wonder how many people are limiting themselves to treating CFS by solely “conventional means” when EMF mitigation could yield them significant health benefits?