Many of you know what WiFi radiation feels like (yours truly included).

But what about seeing WiFi radiation?

A few days ago I posted some images showing an artists depiction of WiFi radiation. That’s when Barbara wrote to me to share her story.

“…….the first time that I saw cell phone frequencies was in 2006. It was Nov. and it was a clear, sunny and cool day. I thought rocks were coming at my windshield and so I ducked for a second and when nothing hit my van I carefully peeked up as I was driving 100 km an hour and I saw what looked like curvy black thin spaghetti worms coming directly at me. I was mesmerized and kept looking and I could see these things in groups, like swarms, going towards other peoples vehicles and then bouncing away and then going at them again, repeatedly.

I was very sensitive at the time and was experiencing several symptoms such as ringing in my ears, dry burning eyes, joint pain, sleeplessness (taking medication for that), etc. When I arrived home I told my husband that I saw what I thought were microwave frequencies and he asked me what did they look like and when I described them, he said he saw the same thing that day.

Of course, in our small town there were only two places where antennas were located and one was behind our home on a tower since 2001. We weren’t living there at this time. We had to abandon our home in 2003. But there was a single antenna on top of the town hall and that is where he saw the frequencies too. 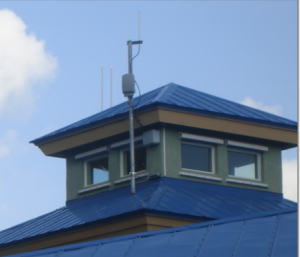 Since that first time I have seen them look differently, depending on my degree of sensitivity and humidity and temp. conditions. On an overcast day with a lot of humidity they look like long hollow tubes with curves in them which look like broken links in a chain. Inside the hollow tube I can see clusters of black dots. I believe that when someone is taking a call on a cell phone the frequency has several clusters of dots. When the signal is just to stay in contact with a phone, the dots are fewer. I see these tubular frequencies bouncy off of cars and other metal objects.

I believe that when these frequencies are reflecting off of metal they slow down enough to be visible otherwise they are moving too fast to see. I have a meter and when I can see them really clearly, the levels are high. When the levels are low I can faintly see them and they appear as just hazy wiggles without definition.

Since I discovered that I can see frequencies I looked at power lines and I can see black hazy wiggles coming from the lines out to a distance of several feet. When we lived on a lake for a short time in 2006, I could see frequencies above the water when a helicopter flew over. The air was filled with bright swirling intertwining lines of yellow light. From a distance these lines look long and sometimes inches wide ( a few inches) and other times very long ( a few feet) and black and thin (1-2ml). When they are up close and coming towards me and my meter, they look black, thin, curly and short (just inches long and a few ml wide). When they reach the meter, the reading starts to fluctuate.

It was winter and I was walking up the cottage road, looking for people who were in their cottages because I could feel and hear the frequencies so loudly and I wanted to see who was around and how close they were to my house. As I walked up the road I could see waves of frequencies coming through the forest and speeding towards homes where people were staying. this was a vacation area and most cottages were empty. Some were all year round homes, like the one we were renting. I’ve even seen these frequencies bouncing off of peoples homes with foil insulation under the siding.

Foil In The Walls

I was at a friends home. He is a professor at our University, Acadia U. in Wolfville, N.S. He was calibrating my meter and I went to his home to pick it up. I was standing outside on the covered stoop and I could see the long, thin black wiggling lines bouncing there. I asked him why was that happening and he told me about the foil.

When I was inside his home, I could feel the frequencies and I asked him why I could feel this vibration going through my body and he told me he had foil in the walls as well. I asked him why he did this and he said if he had known about the microwave frequencies before he built house, he would have done things differently. He did it for insulation reasons. I told him I couldn’t live in that house the way it was. He was upset with me and we haven’t really spoken since.

At the time he was in his mid fifties and just starting to get a bit of grey in his dark, full head of hair. A few years later I saw him and he was completely grey/white. I was very surprised. I believe the exposure to the wifi at the University and the exposures he experienced in his home caused this premature grey/white hair from the stress. I’ve noticed a lot of people looking very grey before their time and in a very short period of time. I am grateful that I can see these frequencies. I like being able to see the enemy and it is just another way to try to avoid exposure.”

Thanks Barbara for sharing your story. If you have a story about EMFs you’d like to share send it to me and I’ll publish it on this blog.