Choosing an EMF meter is about buying the right meter for the right job.

And it has to fit your budget.

The question on most people’s lips when they’re looking for an EMF meter is “whats the ‘best’ EMF meter?” 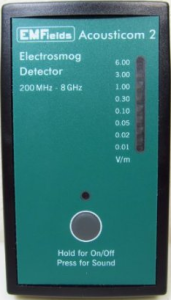 But whats ‘best’ for you is not necessarily best for someone else.

It depends on what you want to measure and how much you’re willing to pay.

The only meters that interest me are one’s that offer outstanding value for money.

The new Acousticom 2 EMF meter does that.

So here’s my review so you can make your mind up if its the best meter for you.

What Can The Acousticom 2 Measure?

The Acousticom 2 can measure RF (radio-frequency) radiation. Strictly speaking the Acousticom 2 is more an RF detector than an RF meter, because it doesn’t give you a precise digital reading of RF levels. It gives you an indication of RF levels by virtue of the flashing lights on the LED display. But for the purpose of this review I will call it a meter rather than a detector.

Its suitable for detecting radiation from the following sources:

Here’s my video review, so you can see the meter in action:

This meter is equipped with the same RF detector as the Acoustimeter so the technical specifications are nearly identical:

An alarm which sounds at higher exposure levels

There are 3 things I like particularly about this meter:

For me, the last point is the most important one. If you’re electrically sensitive its the low-level readings at the bottom end of the scale that are of particular interest because if you’re doing mitigation work you need as much information as possible. With these two meters switched on, side by side, the Acousticom 2 picks up RF radiation when both the Acoustimeter and the Cornet are showing there is no radiation. Being able to get RF readings down at the 0.01 V/m level is an eye-opener.

I guess I would have liked an LCD display with RF levels shown in numbers like the Acoustimeter, but then I suppose this would bring it back into the same price bracket as the Acoustimeter. But in reality when I use my Acoustimeter its the LEDs and the sound that interest me most rather the numbers on the display. This is probably because as soon as you are in an environment with RF radiation you can interpret this information without having to think about it.

Where Can You Buy The Acousticom 2 EMF Meter

You can buy this meter from this company. If for any reason you’re not satisfied with your purchase they’ve a 30 day no questions asked refund policy. If you live in the UK you can buy your Acousticom 2 here.

The first step in effective EMF protection is knowing what the EMF levels are in your environment. This meter will help you do that. The Acousticom 2 is an excellent EMF meter for the price.

If you have a question on the Acousticom 2 EMF meter, put your question in the comment box below, I’ll do my best to answer.