“I live in a house protected by more than a few crystals. Essential as there is an electricity substation nearby.

Since attending the Baden Baden Medicine Fair in the 1990s, where electromagnetic fields (EMFs) and geopathic stress (GS) as a cause of dis-ease were regularly discussed, and speaking to researchers, healers and doctors working at the cutting edge of energy medicine, I am well aware that EMFs can have a seriously detrimental effect on health, as may GS.

The evidence is increasing year on year…….the need  for EMF protection was apparent when I had my very  first computer. I felt that it drew all the energy from me, leading to rapid exhaustion. But, also, it kept crashing. Clearly something was wrong.

The computer engineer  also happened to be a martial arts instructor and had a  good understanding of how subtle energy works. Having first ascertained that there were no ghosts in the property, he gave his considered opinion: “psychics and computers don’t mix.”

It would appear that my energy  was interfering with the computer in the same way that  it was interfering with mine; the two were incompatible. Agreed. But unfortunately writers and modern-day publishers have to communicate via the Internet, and I often write on a computer for many hours a day.

I’ve found plane travel particularly taxing, especially long-distance flights – not only does the pressurization and the poor quality of oxygen affect me but also the fact that a plane acts like an electrosmog generator that has nowhere to discharge itself, all the worse now for the proliferation of cell phones and computers on board. And then there is the horror of full body scanners and X-ray overload.

But it is not only man-made electromagnetic smog that may cause problems. The ground under our feet carries its own geopathic energy, which may be distorted or stressed. Hence the term geopathic stress (GS) which translates as ‘suffering earth’.

So why do we need protecting from what may be very  weak electromagnetic fields but which on occasion may be distorted to as high as 250 Hz?

Well, the correct functioning of our biological rhythms, cell metabolism, physiological state and mental well-being depends on communication between the electrical system of our brain, body and endocrine system, and the weak electro-magnetic and magnetic fields generated by the planet.  And, our bodies are full of magnetisable materials such  as the iron in our blood. Life on Earth evolved against the natural electromagnetic field of the planet and so human beings are accustomed to living within its background oscillation at a frequency of around 7.83 Hz and can adapt to the slight fluctuations in the field created by electrical storms, magnetic irregularities and solar activity. However, larger fluctuations in electro- magnetic and geopathic energy may be detrimental to the health of human beings.”

The above is an extract from a new book by Judy Hall called ‘Crystal Prescriptions: Crystal Solutions to Electromagnetic Pollution and Geopathic Stress An A-Z Guide (Volume 3)’ .

I realized the importance of crystals in dealing with my own health issues a few years ago when a kinesiologist I was consulting recommended some stones for me. This spurred me to research the issue further.

What I Liked Particularly About This Book 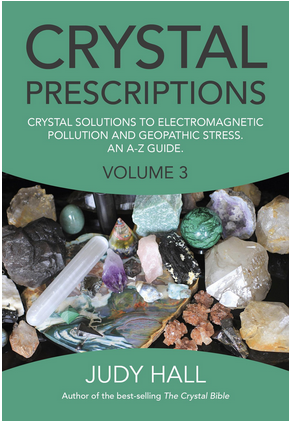 I’ve read several books on using crystals and so I’m quite familiar with the healing powers of crystals.

I like this book because it’s the only crystal book I’m aware of that is exclusively devoted to the issue of EMFs and GS. And Judy has good reason to do this.

She says “I’ve always been electro-sensitive and have found it difficult to live fully in my body especially when around computers…..I’ve had to find solutions and thankfully crystals were invaluable as always. I learned how to turn toxic energy into something that would help to heal me.”

The Dangers Of EMFs

Judy lays out the dangers of EMFs very clearly. She quotes liberally from the research of Professor Denis Henshaw of Bristol University who has examined the question of how magnetic fields interact with the body generally and more specifically the effects of corona ions emitted from high voltage power lines.

Professor Henshaw says “these lines produce an electrical field large enough to ionise the air around it”. He’s measured streams as far away as several kilometers from a power line and found that these ions transfer their electric charge to particles of air pollution causing like a domino effect of highly reactive particles streaming away from the power cable. He explains, “these particles are more likely to be trapped in the lung on inhalation”.

Professor Henshaw believes that the adverse health effects associated with electro hypersensitivity and magnetic field exposure could all potentially be explained by circadian rhythm disruption, which is linked to how EMFs affect the activity of the pineal gland.

From an instinctive standpoint Judy is in no doubt as to the danger of EMFs to our health, “since the discovery of electricity we have been increasingly exposed to a wide range of powerful, artificially generated, electromagnetic radiation that adversely affects the Earth’s energy field and the human body.”

Geopathic Stress Recognized As A Causative Factor In Cancer

Judy’s book also deals fairly and squarely with the issue of Geopathic Stress. She defines GS as “negative energies, also known as ‘harmful earth rays’ which emanate from the Earth and cause discomfort and ill health”. Over 4000 years ago the Chinese recognized destructive earth vibrations that they called ‘dragon lines’ and warned against building houses on such stressful sites. European studies in Russia and Germany on GS have been very revealing.

A 1929 German study mapped the earth energy lines in Southern Bavaria and compared them to the records at the district hospital. All of the forty-eight recently recorded cancer deaths in the town had been sleeping above the underground streams. A year later the procedure was repeated in another town which had the lowest cancer incidence in the province. Again a 100% correlation was found. The Berlin Centre for Cancer Research accepted these findings and published the information, stating that earth radiation could be a causative factor in cancer.

Using Crystals To Heal And Protect Yourself

Judy says, “one of the best tools for handling EMF and GS sensitivity is to get yourself grounded…. make contact with the Earth, make a friend of your body, become comfortable in incarnation”. The way to do this is to use your crystals!

She outlines five major ways in which protecting yourself from EMF and GS can be achieved with crystals:

Directory Of Crystals For Combating EMFs

Perhaps the most difficult part of using crystals for healing and protection is deciding which crystals to use. The second half of this book addresses this question with a detailed crystal directory. This contains an A–Z list of symptoms and common issues that may occur as a result of GS or EMFs, with their appropriate healing crystals.