Microwave ovens are handy I know.

They are small, cheap and very versatile.

You can cook a meal in seconds.

You can take food out of the deep freeze and in minutes its ready to eat.

But what about microwave oven radiation and it’s dangers? That’s something we hear less about. That’s what I want to explore in this article. 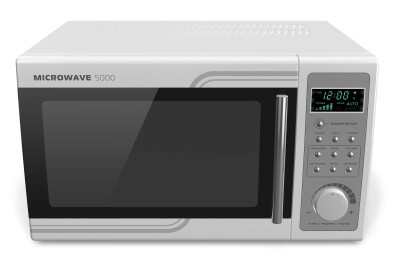 Over time the door seals leak.

In a microwave oven, microwaves at 2.45 GHz (otherwise known as radio frequency (RF) radiation) are produced by a device called a magnetron. These microwaves bombard the food causing the molecules to rotate at the same frequency millions of times a second. This agitation creates molecular friction, which heats up the food.

When you switch your microwave oven on this RF radiation permeates into your home traveling through walls and ceilings. Added to which the oven cables and motor give off high magnetic fields (often over 10 mG), extending over a meter.

And that’s not all. There’s another side to the coin.

The Secondary Dangers of Microwave Ovens

Many studies indicate the detrimental effects of microwaves on the nutrients in your food:

– A study published in The Journal of the Science of Food and Agriculture found that broccoli cooked in the microwave with a little water lost up to 97 percent of its beneficial antioxidants. These antioxidants are the body’s best fighting mechanism against cancer and a host of other debilitating diseases.

– An Australian study found that cooking with microwaves caused a higher degree of “protein unfolding” than conventional heating.

Russian and Japanese studies have already come up with startling revelations how foods drastically lose nearly 60-90% of their food value when cooked or heated in microwave ovens. In fact, it’s now proven that significant portions of Vitamins B, C and E, minerals and other essential ingredients are lost by foods when they are exposed to radiation in microwave ovens.

Cooking food with a microwave oven is a double-edged sword.

On one side, due to microwave oven radiation exposures, foods lose antioxidants that reduce their ability to strengthen the body to fight cancer.

On the other side, due to the agitation during microwaving, numerous free radicals are set free, which attack the cells of the body and damage their configuration. In medical parlance, one of the key causes of cancer is abnormal growth of cells due to loss of their original configuration.

Now isn’t that a double-edged sword?

At least then, some of the free radicals will again resettle in the matter, and less harm will be caused to the tender cells of the mouth, the throat, the esophagus and the stomach.

Another issue with microwave ovens is the use of plastic wrap. One scientist * has recently claimed that this common plastic wrap that is frequently used in microwave cooking produces an identified carcinogen (cancer producing agent), known as DEHA (diethylhexyl), which easily gets transferred to food.

These agents mimic endocrine hormonal system in the body, blocking the hormone’s normal secretion and activity. When this happens, there is significant risk of developing problems with fertility and also cancer.

Actually, most of us are not even aware of these complications.

Some users recommend allowing the food to settle for at least 3-4 minutes after it is taken out of the microwave oven, and then eat it.

To learn more about the dangers of using a microwave oven and microwave technology , see this interview with researcher Walter Graham.

1. If you don’t currently own a microwave oven don’t buy one! Buy a steamer instead. It’s a much more healthy way to cook food.

3. If you are not ready to go this far, if you have children, pregnant women and persons with low immunity in your home, don’t allow them to come to the cooking area (or the walls behind it) when your microwave oven is on.

4. Keep at least one meter away from the oven when it is working. Your risk of EMF exposure will be reduced significantly.

If you want to see for yourself the magnetic fields and radio frequency radiation being emitted by your microwave oven you can do this easily and inexpensively with an EMF meter.