Most days he would eat 3 ready meals swilled down with a half a loaf of bread.

He loved his sport.

He played semi-professional football 3 to 4 times a week and did regular sessions of Parkour, a kind of outdoor gymnastics. Very high impact.

He was working 30-40 hours a week in a restaurant. These were long hours. Often he wouldn’t get in until 4 or 5am.

Like many young people of his age he was drawn into the party scene. Drinking, smoking and having loose sex was fun. It seemed everyone was doing it and to be anyone you had to do it.

He split up with his girlfriend. But the truth was he liked her a lot. As a way of coping he partied even harder.

In the midst of all this he was studying, or was supposed to be anyway. 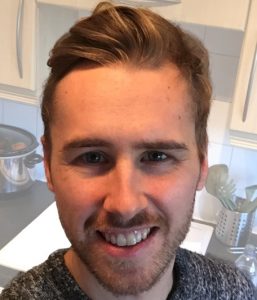 The first symptom that hit him was the brain fog, a feeling of being detached, like being in a bubble.

Then the depression kicked in. A deep scary depression. He didn’t tell anyone about it. He was too confused and embarrassed.

Social anxiety was another biggie. He couldn’t speak to people. He couldn’t look them in the eye. When he did try and speak his heart would beat really fast.

His skin had become dry and flaky. He was forgetful and was suffering from light sensitivity, visual troubles, cold hands and feet, heart palpitations, tingling fingers, insomnia….

He turned to recreational drugs as a form of relief, which seemed to make him feel better.

The Light Bulb Switched On In His Head

In 2011 he was scouring the Internet for answers and he came across an article on ‘Brain Fog’. A light-bulb switched on in his head.

He now knew what he had to. Lewis embarked on an intensive program of Nutritional Balancing.

But it was a rough ride. He could barely function and doing the detox while living with his parents just wasn’t working.

He bought a one-way ticket to Thailand so he could concentrate on the health program. But he quickly ran out of supplements.

He managed to track down a health practitioner who sold the supplements he needed. Taking a long scooter ride over the mountains between Chaing Mai and Pai he turned up on his doorstep.

Lewis was soon working for Robert and learning a lot, but despite following the program he suddenly started to experience terrible symptoms when using his Macbook Air.

“My whole body literally ‘buzzed’ it was like my veins were full of red bull”. He soon put two and two together and realized he was suffering from ‘EMF sensitivity’.

He needed to protect himself from EMFs. So he set off on a tour of Chiang Mai looking for a place with the least amount of WiFi and cell towers present. He managed to find somewhere with just one WiFi signal showing and promptly moved in.

He built a 6ft long 3ft high aluminum cage for his bedroom and for 6 months slept in a full-on Faraday cage.

Fast forward to today and Lewis says, ‘I do not feel EMF sensitivity in the slightest‘.

I previously interviewed Lewis in 2016. He reached out to me a couple of months back to saying “I have more test results and testimonials from our Nutritional Balancing healing program – we have also found new EMF procedures that speed up healing.”

Listen to my fascinating interview with Lewis Rowlands and learn:

*****This interview has been broadcast: to listen to future EMF-health interviews make sure you are signed up to my newsletter.*****