w“I started to play around with electricity when I was thirteen years old. Around that time I got my first home computer system, which was to spark an interest in electricity and electronics. I left school at sixteen and became an apprentice electrician at the city center university research group for ten years, and I have to say that I noticed people changing during that time.

I had noticed that some of the electricians had made the electrical rooms into workshops and they spent most of their day in them. In particular, there were two electricians who used to take their breaks in these rooms and sleep against the switchgear. They had very strange personalities!

In 1987 the hospital was in the process of switching over from conventional florescent lighting to electronic florescent lighting and installing computer systems for the medical records. There were robots in the sterile areas, ultrasonic baths, high frequency induction furnaces in the laboratories, RADAR operated automatic doors, and so on. I was working with many modern devices and no one ever warned me about the toxicity of these. In fact, no one ever told me about effects, harmonic energy making electromagnetic fields on cables get very large, pulsating magnetic fields affecting the brain, electrical and electronic field emissions and to stay out of them.

I would regularly work through the hospital underground distribution system corridors and be inches from 6000 volt AC electricity power cables and florescent lights. We would smash up the numerous florescent tubes that we would change every week, releasing toxic clouds of mercury contaminated white phosphor dust. Today, I can only imagine what these things must have been doing to my biological health.

The thing about working in a hospital is that you get to meet a lot of people who are sick and dying. I would have many conversations with these people over the years. The consistent thing that they would repeatedly say to me is that they could not understand how they had become ill. It was always a mystery to them.” 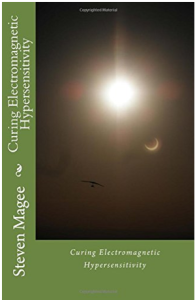 This is an extract from Steven Magee’s latest book, ‘Curing Electromagnetic Hypersensitivity’.

Steven’s written a series of books on the phenomena of EMFs and health.

Not because he’s got a passing interest in the subject.

Because, to use his own words, in 2009 he received a “biologically toxic electromagnetic radiation exposure” and he became electromagnetically hypersensitive.

At home his relationship with his partner became strained and within a year they broke up.

At the time he was working in a cubicle desk surrounded by colleagues with cell phones and computers with WiFi. His desk was next to the electrical room that housed the computer network equipment for the building and the wireless router. High voltage overhead utility power lines were approximately 30 feet from his desk. His office was situated across the road from an airport facility.

He decided to seek medical help. His doctor said his symptoms were ‘a normal aspect of aging’ and prescribed him Provigil to keep him awake. The Provigil allowed him to stay awake but the medicine also caused unpleasant side effects.

Stevens symptoms became extreme. He decided to take matters into his own hands. Despite being an electrical engineer he realized he knew surprisingly little about EMFs and health. He started to research extensively and conduct his own experiments.

He discovered the pioneering work of John Nash Ott, who had devoted more than 30 years to research the effects of EMFs on plants.

He advanced in a scientific manner experimenting on himself and in his own home. He realized that by observing leaf growth, leaf patterning and stem branching on the Dieffenbachia plant he could determine the toxicity of different locations in his home and garden. He measured the EMFs in his environment and took corrective action.

His measurements revealed that his own home in Tucson Arizona and other homes he visited in the Tucson area were loaded with biological toxins:

Despite these toxic conditions Steven successfully adapted and achieved a 95% recovery in his health.

How Did Steven Achieve A 95% Recovery?

He made adjustments to his home environment to deal with these EMFs.

He got wise to dirty electricity. He made his own filters to deal with this. He identified wiring errors in his home, he had these corrected. He also had his root canal removed. Much to his surprise a metal rod was extracted from his mouth that had been supporting the metal cap.

In 2008 Steven had commissioned the largest thin film photovoltaic installation in the world, so he already knew a lot about light. He researched health and light and particularly the treatments developed for Seasonal Affective Disorder (SAD). He experimented with different light exposures and developed what he calls ‘Horizon Polar Sky Fatigue Therapy’, ‘Rotational Sleeping’ and ‘Rouleaux Flushing’.

He looked at the grounding of his home. He realized that the classic Ufer grounding as used in most American homes was “largely useless”. He upgraded his home grounding and developed a system of RF grounding to improve on this.

Experiments with the Dieffenbachia plants lead to a breakthrough. By connecting them to a 1.5 volt battery he observed that the plants flourished. He deduced that these favorable results were caused by the DC voltage of the battery which was replicating the DC charge from the earth.

He decided to experiment on himself and devised a nutritional protocol based on salts and minerals (electrolytes) to enable his body to better derive benefits from the earths natural DC charge. He compares this ‘Radiation Resistance Supplementation Routine’ to lead acid battery maintenance, “the human body appears to be a rechargeable battery that is charged from the atmospheric DC voltage and by being barefoot in contact with the ground”.

Where To Buy This Book

‘Curing Electromagnetic Hypersensitivity’ can be purchased at Amazon.com.

A few days ago I conducted an interview with Steven. My interview covered the following subjects:

Update: This interview has now been broadcast. You can access the MP3 download and transcript of this interview here https://www.electricsense.com/interviews-emf-experts-offer/