A few day’s ago I received an email out of the blue.

It was from a Dr. William LaVelle in California. 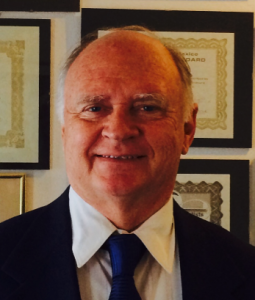 In his email to me Dr. LaVelle explained that he believes he’s discovered a way to activate a persons natural ability to harmonize adverse frequencies.

He told me “a combination of alternative protocols have had a strengthening effect on my patients when tested against cell phones and smart meters. Years later, they continue to “hold” against EMF emitting devices.”

Needless to say my appetite was whetted so we had a brief conversation on Skype.

Just to be clear Dr. LaVelle is not an MD. He’s a doctor of oriental medicine.

Dr. LaVelle has been a health professional for the last 40 years. He became interested in EMFs about 10 years ago when he discovered that his various treatment modalities were activating people’s nervous systems in a way that could be protecting them from electromagnetic frequencies.

He explained to me people were coming to see him with a wide range of issues, a bad back, a sore shoulder, a bad knee, heart issues, Achilles tendon etc.

He started muscle strength testing his patients to test their reaction with a cell phone or other EMF device.

Muscle strength testing is a way of “asking the body” what is out of balance. It’s an applied kinesiology technique which many holistic health practitioners use to diagnose and treat their patients.

Here’s the thing: he found that everyone he tested was also electrically sensitive.

Over time he developed a therapeutic treatment to treat this electrical sensitivity. He’s termed this technique “Natural Brain Firewall Activation”.

It’s a gentle, two stage, hands-on procedure that initially works on the cranial bones to coordinate movement and create more space for the brain. This is followed by a fine tuning of the atlas with the occipital bone and the other cranial bones. Both stages utilize key acupuncture points.

Dr. LaVelle believes that throughout a persons life there is a minute expansion and contraction of the skull that possibly acts as a frequency generator or generator of life energy.

He believes that his technique works by stimulating these higher frequencies (the brain’s natural firewall), which can then harmonize and neutralize adverse frequencies.

Why Weren’t You Born With Your Firewall Activated?

You probably were. According to Dr LaVelle our Firewall becomes de-activated as the result of our stressful, toxic environment. Stress, trauma and toxicity can damage tissues and adversely affect underlying neural control patterns. This in turn impacts our physiological processes.

Dr. LaVelle’s technique expands the space between the brain and the skull and allows for better brain function because of increased cranial amplitude and motion. He believes before activation EMFs are able to penetrate the skull in a way that weakens the nervous system. Firewall activation provides more space for the brain by the increased micro movement and expansion of the skull.

Dr. LaVelle claims that everyone who has been tested a year or more after Brain Firewall Activation is “still holding”. One of his patients still tested strong after four years. Another patient came back after seven years and still tested strong against the normally weakening effects of EMF radiation from her cell phone and smart meter.

Thursday, 7th May at 1:00 p.m. EST (10 AM PST or 6 PM GMT) I’m interviewing Dr. William LaVelle. The interview will last approximately one hour.

Dr. LaVelle is a founding director of the original California Acupuncture Association. While maintaining general practice for the last ten years he has taken particular interest in the effects of his therapies with regard to the effects of EMFs on health.