She’s a mother of 3 children.

She’s also a filmmaker, not without some success.

She marked her debut as a writer-director with Niloofar, produced by Jean Bréhat and Rachid Bouchareb (Days of Glory, Out of the law, Oscar nominations for Best Foreign Film).

Her focus is now on socially conscious issues. To be more specific ‘Generation Zapped’.

That’s the name of her latest project.

Who Are ‘Generation Zapped’? 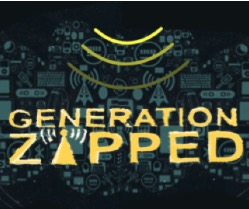 But it’s especially our children.

Because, whether they like it or not our kids are now born into this world of electromagnetic ignorance.

Sabine is on a mission to bring awareness to the world about the harmful effects of cell phones radiation and wireless technologies on children’s health.

She says, “in less than a generation, widespread access to the Internet has revolutionized virtually every aspect of life, connecting people with previously unimaginable information and opportunities.

But in the rush to embrace the convenience and affordability of cell phones and WiFi, few have paused to question the possible consequences of their ubiquitous use.”

Sabine has been working on this project for the last 2 years.

And she needs your help.

She’s got over 30 hours of film footage which now needs, condensing, editing and finishing.

Here’s the trailer for Generation Zapped:

Her goal is to complete for January 2017 so that she can submit to various film festivals and win some recognition.

I’ve decided to help her.

Because it’s a worthy project. I watched the trailer and was impressed.

I get approached by different people from time to time to promote similar projects, this is the first time I’m promoting a film in this way.

Sabine didn’t approach me. I contacted her, last night. I said I wanted to help.

I know how much effort it takes to get a project like this off the ground.

Sabine’s so close to the finishing line on this one, the potential for such a film to change people’s lives for the better is huge.

It would be a travesty if she couldn’t see it through.

Also, I like her approach. Since 2012 when I wrote my book my focus has been on solutions.

This is Sabine’s focus too.

How I Am Helping

She needs funds to complete her film.

I’m putting my money where my mouth is.

I’ve made a donation.

Also, I’m speaking to you.

How You Can Help

There are two ways you can help.

The most important way is to make a donation.

It can be a large or a small donation of just a few dollars.

It’s very transparent. You can see exactly how much funding she’s got and how much she needs.

At the time of writing Sabine needs just under $30,000 to reach her target and finish her film.

And by the way if you pledge money and Sabine doesn’t reach her target then you get your money back.

Besides giving money the other thing you can do is share this message widely.

Getting this message out and protecting our children is such a worthy cause.

Sabine El Gemayel is the writer and producer of Generation Zapped.

Here’s the replay of my interview:

***** Here’s the link to make your donation https://www.kickstarter.com/projects/802512847/generation-zapped