Electrosensitivity, like any chronic disease brings with it its share of hardship and suffering. But this pales in comparison to what Steve Cooper endured.

Steve spent more than 40 hours a week building power microwave amplifiers for the base stations of cell towers. He developed numerous, seemingly unrelated, symptoms, which eventually lead to Toxic Encephalopathy (brain damage due to toxic exposure), a brain tumor and cancer.

Desperate to determine whether a link existed between her husbands exposure and his illness, his wife Carleigh Cooper began researching the effects of cell phone radiation on the human body. She wrote a book on her findings called Cell Phones and The Dark Deception. In it she states:

“ I realize that Steve’s exposure was greater than any you might experience. Nevertheless, research reveals that even the smallest injuries resulting from this type of exposure can eliminate and progress. In other words prior to developing any permanent, recognizable damage from cell phone use, such as cancer, brain tumors, brain damage, or Alzheimer’s disease, other adverse effects slowly and subtly creep in under the radar.”

It is precisely these subtle adverse effects that we all, given that pretty much everyone on the planet is exposed in some way to EMFs, need to keep our eye on.

Here is a brief (all too) interview with Carleigh Cooper and the transcript is shown below: 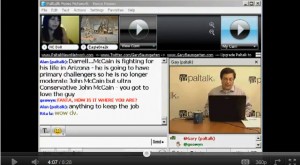 Cell Phones and the Dark Deception

Gary:   “Our guest’s late husband, for 16 years, tested and repaired the power microwave amplifiers for the base stations of cell towers. He developed numerous, seemingly unrelated symptoms which eventually lead to brain damage, brain tumor, cancer. Desperate to determine whether a link existed between her husband exposure and his illness, our guest Carleigh Cooper began researching the effects of cell phone  radiation on the human body and what she found is the basis of an eye opening book. It’s called Cell Phones and The Dark Deception.

Nobody wants to talk about this including those of us who use the phones because we don’t want to put our phones down.  Joining us today and I hope I’m pronouncing your first name right. Usually, it’s the last name I get wrong. Carleigh Cooper, welcome to News Talk online on the Paltalk News Network.

(So do I really have to worry about the cell phone that I use constantly on the go here in New York City?) You know what Gary, yes I’m sorry to tell you that you do have to worry about your cell phone and being on it all the time, and you also need to be concerned if you are keeping your cell phone on your belt and in your pants pockets. (Well, why is that? I’m not holding it up to my head and the concern is about brain tumors, right?) Well there are a lot of deceptions and a lot of concerns. The one that seems to be most prominent all the time is the work of brain tumor and brain cancer, and I think the reason why that has always been the focus is because that may never happen for 20 even 30 years.

I think one of the deceptions is that you are not being told what symptoms you need to look for prior to ever developing cancer. I mean, you may or you may not develop cancer. Of course the risk is greater if you use your cell phone a lot more. But there are precursors that take place as it was with my husband. Prior to ever developing damage, or brain cancer and most people don’t realize that there is a link. That 70% of cell phone users experience 1 of 7 common side effects from cell phone use.

(And what might those be, I would imagine blurred vision might be one of them?) You know what, cell phone radiation is absorbed readily in the eyes, and like you mentioned before the brain absorbs a lot of radiation. After 3 to 5 years. Well let me back up. One of the deceptions of cell phones is that you can use your cell phone; you can be on it for 15 minutes, 30 minutes, an hour and there are no responses from your body for that use. It’s a cumulative effect. So although your brain has no pain receptors, and you are not feeling any kind of response, no headache, you assume that it is safe. Well what happens, like with other toxic exposures, is this exposure accumulates. As you continue the exposure, then adverse health effects start to occur, you just can’t relate it back to what the cause or what the source was. Just like smoking when you get cancer, you’re not thinking back to a cigarette you had necessarily or you weren’t before you were told.”