A few days ago I received this message from one of my readers:

“I’ve noticed on ElectricSense that people are requesting something to help them explain electrical sensitivity to others. At the request of my doctor, I put together a 2-page document (as he said, so it could be printed front and back). He’s already handing it out to others in his practice like me, and I’ve also shared it with friends and family who have found the explanations and format helpful. I do not have a website with which to share this more widely.

What I would like to do is to make this resource available to whoever would want to download and use it, as long as everyone was able to do this for free. Diane”

Below is an extract of the 2 page document that Diane has so kindly prepared:

What is electrical sensitivity (ES)? Erica Mallery-Blythe, MD, describes ES as “an awareness and/or adverse symptomatology in response to …electromagnetic fields.” [1]

What are electromagnetic fields (EMFs)? EMFs are fields of force created when charged particles, such as electrons, are accelerated. Naturally-occurring EMFs make life on earth possible. People and animals have energy fields. Manmade EMFs at higher energy levels have increased rapidly.
Like other substances, EMFs are potential stressors. The effects can be beneficial (as when EMFs can stimulate bone healing), benign (not perceived), or harmful. EMF stressors can be 24/7 (e.g., from pulsed smart meter transmissions), intermittent (e.g., from cell phone use), or rare. 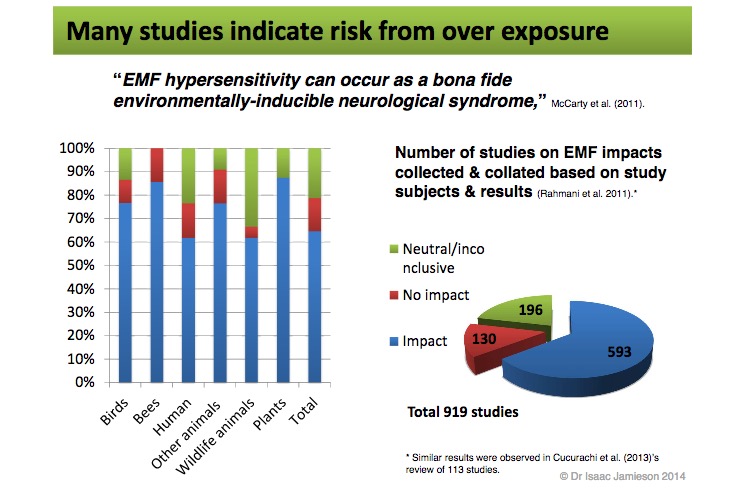 While a current Wikipedia article says there is “no scientific basis” for ES, the article cites only a few older studies, and its neutrality is disputed (3/16) [4]. By 2005, the World Health Organization (WHO) had concluded that ES “symptoms are certainly real” and “can be…disabling”[5].

WHO in 2011 classified “radiofrequency electromagnetic fields as possibly carcinogenic to humans (Group 2B), based on an increased risk for glioma, a malignant type of brain cancer….”[6]

Bioinitiative 2012 Report concludes from more than 1800 studies that EMF “bioeffects are clearly established.”[7] These bioeffects include DNA damage, carcinogenicity, infertility, increased vulnerability in children, and fetal/neonatal risks, among others. 27 medical doctors, PhDs and scientists contributed to the nonprofit’s report. The adverse bioeffects occur below guideline-recognized levels.

In 2013 the American Academy of Environmental Medicine asked the Federal Communications Commission (FCC) to “recognize non-thermal effects of RF exposure…and lower limits of RF exposure to protect the public from the adverse health effects of radiofrequency emissions.”[8]

RFR exposures in children have increased a billion billion (quintillian) times in one generation.

I’ve uploaded the full document in PDF format so that you can download it, print it out and give it to your healthcare practitioner. Click here to download the Electrical Sensitivity – Free Printout.

A huge thank you to Diane, I’m sure this information will help others.