This new EMF meter is called the Cornet ED78S.

Does this meter revolutionize the world of EMF meters?

I wouldn’t go that far but the ED78S is a great little package.

Here warts and all is my review.

The Technical Specifications of The Cornet ED78S EMF Meter 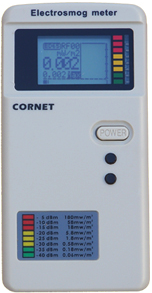 For the purists this is what the Cornet ED78S boils down to:

If at this stage you’re thinking ‘OK but what does all this mean’? Watch this short video to get clear on what this meter is really about (to watch the video click the image below):

Why Would You Buy The Cornet ED78S?

You’d buy this meter because you wanted to measure the EMFs in your environment. OK, but what EMFs?

This meter measures 2 types of EMFs:

radio frequency radiation. Thats to say EMFs from things like

magnetic fields: Thats to say EMFs from things like:

Where Can You Buy The Cornet ED78S EMF Meter?

The Cornet ED78S has been replaced by the Cornet ED88T, see my review here.

This article was last updated January 2018.