Picture this common scenario: a pre-teen after school, languishing upstairs on the bedroom carpet, talking endlessly with a best friend…cell phone pressed against head. This scene plays out every day, in countless numbers and yet, we don’t seem to give much thought to the very real danger that cell phone use can cause brain cancer in children. But emerging science just might serve as a wake-up call. 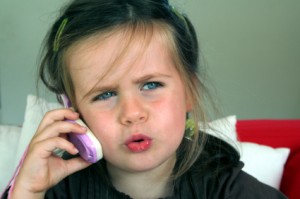 Recent research, based on 15 studies in six different countries, looked at the effects of electromagnetic radiation (like the radiation from mobile phones) on living cells. A summary of these studies, published in the upcoming edition of Pathophysiology, cites some very distressing evidence. The journal article reports that wireless technologies including cell phones, cordless telephones, Wi-Fi and radiation from cell phone towers all contribute to biological health risks including brain cancers.

The editor of the article, a Columbia University professor of physiology, suggests that there is a significant interaction between radio frequency emissions and living cell elements, including DNA.

“The epidemiological studies “point to increased risk” of developing certain cancers associated with long-term exposure to radio frequency, he said.” *

If this disquieting commentary doesn’t shiver your timbers, think on this: one study conducted by Swedish researchers found a 5X higher risk of malignant brain tumors in young people who started using cell phones before or during teenage years.

In plain terms: that cell phone pressed to your youngster’s head for long periods–perhaps even hours at a time– may translate into dire health consequences.

The studies also showed a consistent correlation between exposure and disease. Scientists involved in the study state that the evidence is strong enough that public warnings and new and more protective exposure guidelines are warranted.

Because of my own personal experiences, I have been sounding the alarm bell on the problems related to electrical sensitivity for a while now. It is my earnest hope, supported by an ever-increasing base of authoritative research, that scientist’s warnings will be heeded.

There can be little doubt that electromagnetic radiation is poisoning our environment.

Excessive cell phone use by youngsters may have already become part of modern culture, but adequate safeguards can and must be put in place. Reliable evidence shows a serious potential problem in our future: a brain cancer epidemic. Safety standards have to be raised and raised high. Precautionary steps must be taken and taken decisively. Limits on mobile phone usage need to be implemented, both in our homes lives and in our legislation.

To learn how to protect you and your family from cell phone radiation click here.