““NEUTRALIZE HARMFUL RADIATION.” The subhead calls the button a “shield,” gives its brand name, and calls it “award winning and clinically approved.”

Brief text at the foot of the page calls the “shield” a “silicon based micro processor that neutralizes harmful radiation” and explains, “The device is distortion and noise free to communication devices, effectively neutralizing electromagnetic radiation of the device it is applied to.”

The above words are not mine they’re taken from a website called Physics Today. 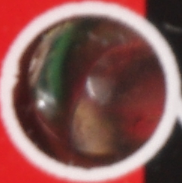 The piece in question is a full-page color advertisement published in last weeks “Science Times”, the scientific supplement to the New York Times.

This is the world we live in. Unfortunately.

On the one hand we castigate a product that relies on highly questionable technology combined with slimy marketing to cajole customers into buying. We even cite the FTC “Cell phone radiation scams” web page to drive home just how dubious these gizmos are.

Watch closely as we make a smooth transition from a gadget which claims to ‘neutralize harmful cell phone radiation” to a link to the National Cancer Institute’s website which says there’s “no evidence…..that radiofrequency energy can cause cancer.”

Do you see what I’m saying?

We start by criticizing something which is eminently ‘criticizable’, the dubious cell phone gizmo, then before you know it the bombshell has been dropped. Cell phone radiation is deemed safe.

They just let you think it.

Effective because this is exactly what most people want to hear.

What Do You Want To Hear?

Do you want to hear about the research that links a myriad of serious health effects, including brain tumors, cancer, cardiovascular disease, autism, ADHD, damage to DNA and infertility to these exposures?

Do you want to hear about the thousands of peer reviewed studies, conducted in laboratories and field studies from around the world, that show these EMFs to be harmful?

Do you want to hear about the numerous warnings issued by scientific and medical experts based on the evidence before them?

Do you want to hear that these EMFs penetrate walls made of wood, metal, and even concrete? And that they also penetrate our bodies?

OK, you personally, I know you’re prepared to hear all this.

But let’s face most people are different from you. They don’t want to hear these facts, these inconvenient truths.

By associating a cell phone gizmo with an ambiguous statement about the effects of radio frequency energy we hit the bull’s-eye. To reinforce the idea that the cell phone gizmo is a scam but cell phone radiation and associated EMFs are safe.

Am I exaggerating? Hardly. Because this is exactly what the average unsuspecting Joe will read into all this.

So where does this leave you?

I know where it leaves me.

I’ve been clear on all this for a long time.

The dangers are real. But a little diode that you stick on the back of your phone does not magically make cell phone radiation safe.

This is not the way to go about effective EMF protection.

If you want to dip your toe in the water on EMF Protection, my Free Report and newsletters are the place to go (see top right of your screen for the download).

But if you’re looking for a complete solution to EMF protection then stay tuned. It’s precisely what I’ve been working on for the last 6 months.

I don’t advocate any cell phone chips, diodes, neutralizers, pendants, amulets or other shenanigans. Just concrete solutions that work. Make sure you’re subscribed to my newsletter. You’ll get details in your inbox soon.

(Do not insert links or cite the names of cell phone gizmo’s in your comments. Thank you.)