Below is an interview with Walter Graham, British speaker and researcher on microwave technology. 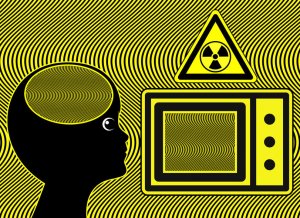 What you will learn in this interview:

– microwave ovens were originally designed to operate at 900 MHz, but because the microwaves came through the sides of the oven the frequency was changed to 2.45 GHz

– many cell phones operate at the 900 MHz level, precisely that frequency which was considered to be too dangerous for microwave ovens

– though there is a lack of studies carried out on the effects of cell phone antennas on buildings have been known for a long time, in the 1950s the US Embassy in Moscow had two ambassadors die in a row with tumors, and other staff fell ill with cancer, joint pains, headaches, sleeplessness and other symptoms. Investigators found that 3 microwave antennas were pointing at the building.

Update April 2019 – Unfortunately this interview has been removed from Youtube. You can still read the transcript of the interview below.

Interviewer:  The higher up in the gigahertz frequency we get, the more dangerous it is to our bodies.  Or is it a kind of specific frequency that actually is more dangerous to us than another one?

Expert:  Each frequency has its own characteristics.  For example, the original microwave oven was designed at 900 megahertz.  And, whenever they tried using the 900 megahertz, it actually came through the sides of the oven and would cook the people in the room.  So they had to move up the frequency letter to 2.45 gigahertz because at that frequency it would do the maximum damage to the hydrogen molecule and cook it, but it wouldn’t penetrate the steel sides.  So, therefore, it could be contained more easily.

But, whenever you think that a lot of people are walking around with cellphones that are at 900 frequency, the one that could penetrate the steel sides of an oven, and you only have a quarter inch of skull, an eighth inch of skull, it’s bound to be penetrating into your brain.

Interviewer: Right, but even microwave ovens leak, don’t they?  They leak out the microwaves.

Expert: I have testing equipment, and I haven’t found one that doesn’t leak.  They all leak – even brand new ones.  Because it’s very hard to contain microwaves with a door.  If you have a door, the seal is usually a rubber gasket; that means nothing to microwaves.  And, they do apparently all leak, I haven’t come across one that doesn’t.

Expert: No, they bounce around.  They bounce off of any metal objects in the room, even walls themselves.  They’re bouncing all over the place, mirrors, everything that’s metal, they reflect it, so all of the kitchenware and so on.  Everything in the room it will be bouncing off of…

Interviewer: Now, you had an interesting story about one of the banks in regards to wireless, and what they did to prevent what they claimed was internet coming in from the wireless.  But, then they want to prevent people from accessing their signal.  Tell us that story.

Expert: Yes, it’s quite interesting.  I actually had heard, or read, on the internet about 3M, a company who makes plastics, and that they had designed a plastic with a coating of lead on it.  And, they made it sticky so you could put it all over your windows.  I wanted to prevent WIFI from coming into the house and into offices and so on.  When I called them up, I asked them who’s buying their plastic shielding and they said, “Oh, banks and lawyers.”  And I said, “Why would a bank want this shielding?”  And they said that it’s actually to prevent all of their secrets going out the window.  Whenever you have WIFI, apparently someone sitting in a car outside the window can pick up all of your account numbers and every transmission.  So, they were actually having to seal the buildings off.  All the windows having to be covered in banks and so on. What they’re doing, is they’re creating a microwave oven out of the room, because now there’s nowhere for this to escape.  So the levels in the room are going to escalate.

Interviewer: Now, you told me that the schools in the Northern Island now are all getting brand new laptop computers, and as you mentioned, this is obviously very dangerous.

Expert: There’s different ideas of why they’ve done this, but mainly on the surface, it appears to be easier.  Children from a secondary school can move from room to room with their laptop and continue classes from different professors or teachers.  But, that doesn’t hold up to examination, because they have it here in primary schools, and these children don’t move classrooms.  So, why are they bothering to give them wireless?

To learn more about the microwave oven dangers and what to do about it click here.