Do you really need to protect yourself from WiFi radiation?

I guess the first question that needs to be asked is ‘what is WiFi radiation?’ Which leads to the question ‘is WiFi safe?’

Because if you’re not clear about these questions it’s pointless talking about WiFi radiation protection.

What Is WiFi Radiation?

Most wireless routers and similar wireless devices emit a field of wireless radiation 24/7.

This microwave radiation is exactly the same kind of radiation that microwave ovens use to cook food.

When you put food in a microwave oven and press ‘on’ this bombards your food with microwave radiation which creates molecular friction and heats up the food. It’s known as ‘the heating effect’ or ‘the thermal effect’.

WiFi devices like wireless modem routers and wireless computers contain transmitters that use this same kind of microwave radiation to send information back and forth in the air which can in theory have a similar heating effect on our body.

Luis Hernan, a student at Newcastle University in the UK, has produced a series of photographs using an Arduino based Kirlian device that can show the strength of wireless signals according to color.

Most routers operate at a frequency of 2.45 GHz. But some are called a ‘5G router’. This means they emit at 5 GHz— not to be confused with 5G, the 5th generation of cellular communications.  I have published an extensive article — is 5G dangerous? which explains the science behind 5G and what you can do to protect yourself.

The whole controversy surrounding the safety of these exposures revolves around this heating effect. For people, in most cases there is no heating effect.


On the one side there is the telecom industry and other vested interests. They say that because there is no observable heating effect with WiFi and similar devices that these technologies are safe.

On the other side there are now thousands of peer reviewed studies conducted by scientists from around the world that show WiFi radiation to be potentially extremely harmful BECAUSE the issue is not about the heating effect.

All this might sound unpleasant but the bigger concern is that the upshot of these adverse biological effects are life threatening diseases.


Thousands of studies link long-term exposure to WiFi radiation to many serious diseases including:

This is not to mention extensive anecdotal evidence – this website alone is littered with thousands of testimonials from people that have experienced severe adverse health symptoms from these exposures.

The World Health Organization has classified WiFi radiation type exposures as a ‘possible Class 2B carcinogen’.

If you still have any doubts as to whether WiFi is safe click here.

What Are The Benefits To Protecting Yourself From WiFi?

People report these immediate benefits to eliminating/significantly reducing the wireless exposures in their environment:

The long term potential benefits of reducing your exposure to WiFi are that you DON’T suffer the adverse biological effects and diseases associated with WiFi as listed previously.

Here are some simple steps you can take to limit your exposure to WiFi router radiation:

1. Use The Right Ethernet Cable 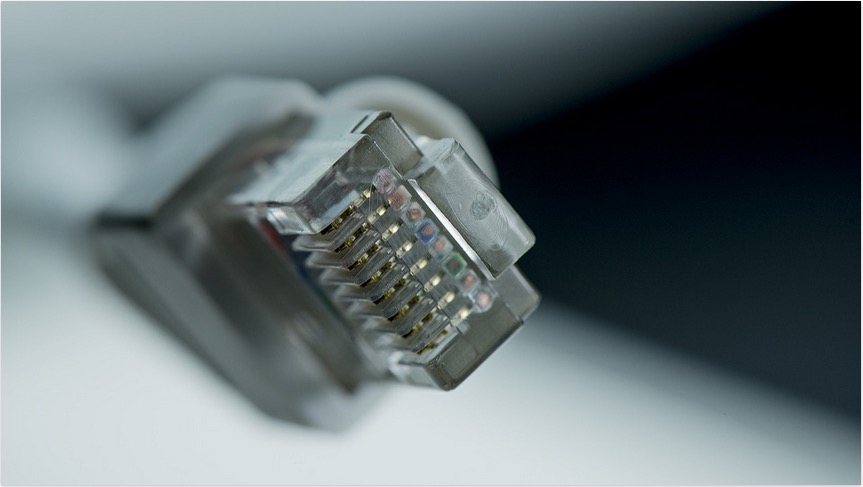 Your Ethernet cable is the cable that links your modem/router to your PC. It provides you with a hardwired internet connection.

Most people don’t give this cable a second thought. They use the cable which comes with the modem/router. Mistake.

This Ethernet cable can be a source of RF radiation and so needs to be shielded. There are lots of different qualities of cable category 6, 7, 8 etc. I recommend at least Cat 6 SSTP (screened shielded twisted pair) Ethernet cable (the one I’m linking to here is category 7 because there is little difference in price with the category 6). Maybe the cable that came with your modem/router is Cat 6 SSTP. In that case you’re OK. If in doubt change it.

2. Disable Wireless Function On ALL Your Devices


You’ve disabled the wireless on the modem/router but you must also disable the wireless on your on your computer (desktop, laptop, iPod Touche, iPad, tablet) AND also printers, projectors and anything else that might have Wi-Fi capability. Again a lot of people overlook this. Look for software options on these devices to do this.

Lower Wi-Fi power intensity is now an option on certain wireless set-ups. Look carefully what the software allows you to do. And keep your eye on it once you’ve changed the settings to make sure the default settings don’t come back on again.

If you’re unable to disable Wifi via the software you may be able to have the WiFi module physically removed (requires some electrical knowledge).

Replace your wireless keyboard, mouse, printer, scanner and whatever else you have that is wireless with USB wired versions. Solutions now exist even to connect devices such as iPads, which are not designed to be hardwired, to the Internet via a USB Ethernet adapter as shown in this video:

To implement the solution shown in the above video you will need:

Why? Because it offers a radically safer alternative to standard WiFi.

The JRS Eco-WiFi router is actually a package. It was developed by a father (he’s also an electronics engineer) who was concerned about the WIFI exposures in his kid’s school. It’s composed of:

This 10x reduced pulse interval translates to a 90% reduction in WiFi radiation when the router is on stand-by. To see exactly what I mean, watch this video.

I’ve written a full review on the JRS Eco-WiFi Router. You can read it here.

The ideal set-up is the JRS Eco-WiFi Router and some good quality shielded Ethernet cable.

Legally there is nothing you can do to oblige your neighbors to remove their WiFi so you need to have a softly softly approach. Go and see them, have a friendly chat. Ideally take an RF meter with you, show them the radiation levels they are exposing both you and themselves to. Take some print outs of some of the studies that have been done on the dangers of radio frequency radiation.

If they are unsympathetic EMF shielding should be considered only as a last resort measure. An effective WiFi radiation shield may well involve shielding several rooms – this is no small undertaking. Click here for more information on RF shielding.

Reduce Your Exposure To WiFi Radiation Without Eliminating It

I know that some people can’t quite bring themselves to surrender their wireless devices so here are some tips on minimizing WiFi without eliminating WiFi.

WiFi radiation exposures drop off significantly with distance (called the inverse square law). Many routers have a strong enough signal to maintain a connection up to 100m from the router. Make sure you put as much distance between you and your wireless router as you can without diminishing the efficiency of your connection. Remember: walls don’t stop wireless radiation, never situate a wireless router behind a bedroom wall.

2. Switch off at Night

Studies tell us that the biggest danger with WiFi radiation comes from nighttime exposures; cellular regeneration, 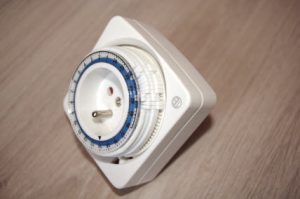 rejuvenation, and detoxification is impeded. Notably melatonin production can be significantly reduced. If you really can’t bring yourself to remove your wireless router you can install a simple mechanical electrical timer (see attached image) on the socket where you plug your router in. Then just set it to turn the power off during sleep time. 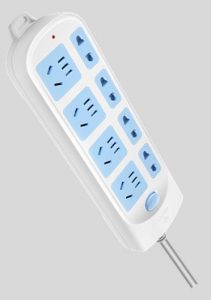 This means that when you set your timer to switch off from 10 pm to 6 am, for instance, that it switches EVERYTHING off that’s plugged into your power strip.

There are two advantages here, besides saving money on your utility bill, you also eliminate any EMF emissions that these appliances are producing.

My recommendation is to use a power strip that has surge arrest which will also ensure your equipment is protected from over-voltages (i.e. lightening strikes) and that it’s grounded.

If you use a USB Wi-Fi adapter (for PCs that don’t have a built in wireless network interface card) use it on a USB extension cable (10 feet or more). The same goes if you use a 3G or 4G USB internet stick, or dongle, to connect to the Internet while you’re traveling. A USB extension cable will significantly reduce your exposure. Tip: the further the USB internet stick is from you when you’re surfing the Web, the less you will be exposed. Buy a USB extension that’s a good 10 to 15 feet long.

Is Powerline Networking The Solution?

This goes under various names ‘powerline networking’,’broadband over power lines’ (BPL) or ‘Powerline Ethernet’. Whichever name is used the principle is the same, special adapters are used to send the Internet signal through your home or office wiring.

What does this mean? It means you don’t need to have WiFi BUT these adapters do introduce radio frequency signals (RF radiation) on to your house wiring.

Combining RF radiation with power line frequency electrics is known to give rise to the phenomenon of ‘dirty electricity’. There are many health issues associated with dirty electricity. For this reason I do not recommend BPL as a safe alternative to WiFi.

Are Harmonizers And Neutralizers The Solution?

There all sorts of energy devices on the market which claim to harmonize and/or neutralize WiFi radiation – you should not rely on these devices to form the basis of your approach to EMF protection. I’m not alone in saying. Over the years I have spoken to dozens of scientists, electrical engineers, researchers and EMF experts on this subject.

Researcher Richard Conrad PhD explains, “people claim they’ve got this holographic label that’s imprinted with the right frequency or has the ability to take in EMF and convert it to something beneficial to the body, re-radiate it and protect you. It’s absolute fantasy nonsense.”

Building Biologist Michael Schwaebe comments, “when we choose to have an energy device to remedy something we know that’s wrong with us, what happens is that we often delay taking a pro­active move to mitigate our exposure so our exposure continues and ultimately the biology is affected at some point.“

For me by far the worst aspect of the health effects of EMFs is what it’s doing to our kids.

Seeing pregnant mothers talk happily and freely on cell phones, seeing young children, sometimes toddlers, use cell phones like toys, seeing the massive EMF overexposure that all our children are being subjected to, does not sit easily with me.

An important part of this overexposure is WiFi in schools.

A few years ago a video was published on YouTube which showed that the school Wi-Fi network in question produced 3 times as much radiation as the cell phone towers in the vicinity.

Sadly, this is not an unusual situation. To see the video click here.

The dangers of WiFi are real. Use the above tips to mitigate your exposure to WiFi radiation.

Of course there is no cast iron guarantee that if you do reduce your exposure you won’t suffer any of the adverse effects associated with WiFi because unfortunately most people can’t feel these adverse effects, they just fall ill. What’s worse is they never make the link between these exposures and their illness.

Just try switching off your WiFi for one week and see the results for yourself.