“I know cell phones are dangerous but what can I do to convince my partner (or neighbor, or son, or daughter, or boss…) that they are dangerous.”

How many times have I heard this question? 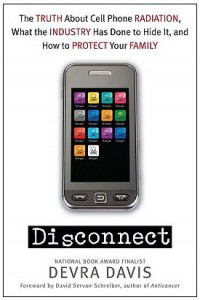 Today I have the answer.

I discovered Dr. Davis back in 2010 on Youtube. As part of my research for an article [2] I was writing I watched her testimonial in front of the 2009 Senate Hearing on cell phone radiation dangers . Feisty stuff.

Her book is a bombshell. So much so that when it came out (and still today) most of the book chains across the US refused to stock it.

My Review of Disconnect

Dr. Davis presents an array of recent and long suppressed research. She shows us the dark side of cell phones…

Safety standards? What standards? Applied by whom? The federal regulatory standards are set by the cell phone industry itself. Health experts have little or no say in policy-making decisions about cell phones.

Cell phone manufacturers have taken their lead from the tobacco industry. The public is being skillfully misled.

Cell phone radiation is a national emergency, she says.

She covers in detail the work of:

-Professor Om. P. Gandhi and his studies of brain absorption from radiofrequency radiation which show that uneven distribution of RF in the brain could result in much higher exposures in certain areas, thereby making the averaging exposures used by industry highly questionable.

She explains how cell phones:

– break down the brain’s defenses,

As she most rightly says the most worrying is what it does to our children. Professor Gandhi in India found that children are more vulnerable than adults to cell phone radiation. The growing brains of children make them especially vulnerable. Radio-frequency radiation reaches much more deeply into children’s thinner and smaller heads than ours. These studies were elaborated on by DeSalles in Brasil and Niels Kuster in Switzerland.

She recounts the story of Robert C.Kane, who worked for Motorola as a test engineer for cell phones for more than two decades, and subsequently developed brain cancer which he believed was tied with his exposures. It cost him his life.

There is also a practical side to this book. The appendix contains information on what steps you can take to protect yourself from cell phone radiation.

Other Reviews Of Disconnect

Davis makes a strong case in her book that we’ve underplayed the possible threat from cell phones for too long…Time and again, she shows the way that industry has been able to twist science just enough to stave off the possibility of any regulation.”—Time Magazine

“Disconnect will surprise many and anger some. It tells all too human stories behind the science and engineering of cell phones and raises important unresolved questions about this universal technology.”—Frank A. Barnes, Professor, University of Colorado at Boulder, Member of the National Academy of Engineering

“An amazing and important book that must be read to be believed. Are these devices safe for humans? The ‘don’t ask, don’t tell’ approach of the industry is irresponsible at best, criminal at worst. Read and learn why and how to protect yourself and your loved ones.”—Mark Hyman, M.D., author of The UltraMind Solution, Chairman, The Institute for Functional Medicine

“A brilliant and courageous tour de force by one of our nation’s leading environmental health experts. Davis provides a detailed exposé that forces us all to take a good, hard look at what we know and what we don’t know about cell phones.” —Ronald B. Herberman, M.D., Founding Director Emeritus, University of Pittsburgh Cancer Institute

“Devra Davis has written a book that will change the way the world thinks about cell phones and the potential public heath disaster they represent.”—Carlos Santos—Burgoa, M.D., M.P.H., Ph.D., Past President, International Society for Environmental Epidemiology

“This book will be a must—read for anyone who cares about our children’s brains.”—David Servan-Schreiber, M.D., Ph.D., author of Anticancer

*Disconnect: The Truth About Cell Phone Radiation, What the Industry Is Doing to Hide It, and How to Protect Your Family [1]” – is compelling reading.