It was the early ‘70s and Nancy was fresh out of college.

As a college graduate in Soviet studies she got a direct commission into the army.

Because of her background on the Soviets, she was assigned to electronic warfare.

It was there that her eyes were opened to the incredible dangers associated with electromagnetic fields and health.

When she came out of the army, she was so blown away by what she had learned that she continued her EMF research.

One day she said to her brother Phil, who was a Navy civilian, “What is it that you do?”

He replied that he was working with radars.

Nancy knew that they were one of the worst things in terms of the health effects of the EMFs.

She tried to explain it to him but, “he blew me off”.

‘It took 20 years, but he died from a brain tumor, directly connected to microwave emissions from cell phones and radars.’

This fired Nancy’s resolve to do something.

But she found her advice was falling on deaf ears.

“I could talk your ear off about the dangers but I couldn’t tell you what to do to protect yourself, you know? I was just hurting people. “

Then one day she was on Facebook and one of the groups she was involved with had just discovered the dangers of electromagnetic energies.

They were all talking to one another.

Nancy said to herself, “Oh my God, give me something I can give them,” and she went back to what she was doing.

Within an hour of research, she came across an article, describing how the Russians were using something called Shungite to shield their electronic equipment from electromagnetic pulses.

And that was how it all started.

When she discovered Shungite, that brought hope into her heart. 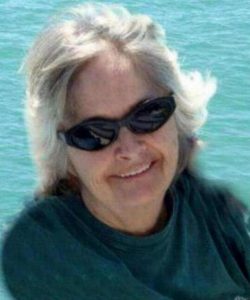 Nancy Hopkins is the author of a new book entitled: Shungite Reality – A Study of Energy. The book relates Nancy’s journey into the study of Shungite, a composite carbon mineral found only in Russia. You can buy her book here.

Shungite has been called “The Medicine of the 20th Century”, because of its numerous attributes from water purification to protection against EMF, WiFi, and radiation.

Listen to my interview with Nancy Hopkins and discover:

*****This interview has been broadcast, to listen to future EMF/health interviews make sure you are signed up to my newsletter.*****