Most doctors are not educated about the dangers of EMFs.

Some even scoff at the idea that electromagnetic fields from things like cell phones and WIFI could affect your health.

I learned this the hard way back in 2002 when I suddenly developed a knee jerk reaction to my cell phone.

But, thankfully, there is a growing awareness in the medical community about the dangers of EMF exposures.

Some doctors are speaking out about the dangers of EMF exposures. Some are signing petitions. Some are even writing books about it.

Dr. Sundardas Annamalay fits in the latter category. He’s written a well researched book entitled Protecting Yourself and Your Family Against Radiation Toxicity.

You’ve probably never heard of Dr. Annamalay but his credentials are impressive. On the Asian continent he’s something of a celebrity.

He’s one of the leading Naturopathic Physician’s, practicing for the last 30 years in Singapore. He’s also a qualified Acupuncturist, Homoeopath, Clinical Nutritionist and Clinical Hypnotherapist. Frankly, he’s got a string of diplomas and qualifications as long as your arm and his client list includes some of Asia’s leading actors, entertainers, diplomats ambassadors and political figures from around the region.

Is There A Wireless Conspiracy?

In his book he reviews the history of bio electromagnetics since the 18th century and the work of Faraday, Gilbert, Kelvin, Helmholtz, Maxwell and Hertz in the 19th century. He lays out the evidence to reveal that, “in no uncertain terms that we are bathed in a sea of toxic electromagnetic radiation”.

Too many people quietly convince themselves that there are no studies that show that EMFs are harmful. This is blatantly wrong. Dr. Annamaly gives an extensive overview of the science, he details the radio frequency radiation studies that date back to the 1940s subsequent to the invention of radar which highlighted the dangers. He also outlines the studies conducted on electrical utility, powerfrequency EMFs, references studies and cites the many eminent researchers that have dedicated their lives to EMF research; Becker, Adey, Hardell, Gandhi, Lai, Cherry, Blank and many more.

He points the finger of blame fairly and squarely at both the cell phone industry that conspired to, “inundate the world with wireless and toxic EMR devices, for the sake of profiteering” with the complicity of the Food and Drug Administration (FDA). He also suggests that the US army knows more about these dangers than we are lead to believe – he devotes a whole chapter to this.

Weak EMFs Can Be More Harmful

One of the arguments frequently bantered around by doubters (and telecom industry stooges) is that, ‘in any case we live in an electromagnetic environment, the electromagnetic field at the earths core, the radiation from the sun and the cosmos….’ True. But Dr. Annamalay points out that man made EMFs differ in one important aspect from natural EMFs, “they radiate with steady regular oscillations or pulses with mainly constant frequencies and amplitudes”. Natural EMFs are a quite different animal, they are “highly irregular with mixed, random frequencies, amplitudes and waveform”.

This is why saying that EMF exposures are too low-level to cause harm is such a poor argument. It’s not so much the power levels involved, it’s the nature of these exposures that are so biologically damaging. In fact there is a strong case for believing that constant exposure to weak EMFs can be more harmful than shorter term exposures to more powerful EMFs.

The second point is how abruptly we’ve changed the non-ionizing electromagnetic environment in less than a century. As Dr. Annamaly explains, “most of the changes have happened in the last few decades and this development is accelerating at an exponential growth rate”.

EMFs Impact Our Health Via The Body’s Energy Field

Dr. Annamalay gives a very clear explanation of how EMFs affect our cells. He gives a great overview of the science and what he calls the “EMF Damage Model” and also refers to the significant number of epidemiological studies which point to an association between adverse health conditions and EMF exposures.

He also gives a nod to a more holistic explanation of how EMFs impact our health via the body’s energy field. One of the first people to put forward this view was the distinguished Yale University researcher Harold Saxon Burr in the 1920s. He suggested that diseases could be detected in the energy field of the body before physical symptoms appear. Burr was convinced that diseases could be prevented by changing the energy field of the body.

Understanding how EMFs impact our cellular processes is important but it would have been nice to see the theme of the human energy field developed in terms of solutions. Nevertheless, this is not just a book about dangers, solutions are proposed. 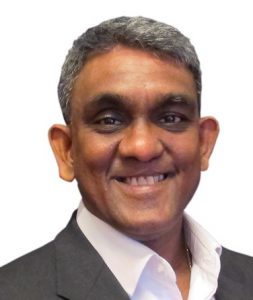 Dr Annamalay is a physicist, author, professor of natural medicine and naturopathic physician, homeopath, acupuncturist and functional medicine practitioner. He’s been practicing in Singapore for the last 30 years and he’s seen over 15,000 clients from over 30 countries and has spoken and presented in more than 12 countries around the world.

Dr. Annamalay’s areas of specialization include gut-brain healing and pain. He’s often called upon to work on clients with multi-factorial reasons for pain and disability.

*****This interview has been broadcast, to listen to future EMF/health interviews make sure you are signed up to my newsletter.*****