In the 90s, as CEO of one of the major food groups in the UK, Brian would spend quite a lot of time on his mobile phone whilst in his car.

He would start hands-free, but invariably after a few minutes because of the poor reception, he would pick the phone up.

Sometimes he would talk for a quarter of an hour, half an hour, three-quarters of an hour.

Then in the year 2000, he started to notice some weird sensations in his head whilst he was on the mobile phone.

He did a bit of research on cell phone radiation but was reassured by all the information published by Public Health England, “it’s not a problem. It can’t hurt you. It can’t damage you. If there are any issues, it’s purely temporary.”

So he carried on using his mobile phone.

Until the weird sensations he was experiencing gradually turned into pain.

This prompted him to cut down on his mobile phone and use a landline more.

Then one day in 2000, “that one day, whilst I was on the phone, it was almost as though my eardrum would burst because the pain was so intense.”

Despite ceasing to use his phone, Brian’s symptoms rapidly deteriorated.

He was soon reacting to his TV, computer, dishwasher, washing machine and even his car.

He downsized from his all singing and dancing executive 7 Series BMW to a low-tech car.

Tongues started wagging, particularly when employees saw the boss driving round in a Nissan Micra.

But he began to think of the consequences of not speaking out, “in 15 to 20 years when a lot more people are becoming electrically sensitive and people are getting cancers and brain tumors and other conditions caused by it, I will feel guilty if I have not done anything to warn people.”

Brian had been pestered by newspapers for some time and refused to give any interviews.

Then one day he had a conversation with a reporter from one of the UK’s biggest newspapers, The Daily Telegraph, they agreed to treat the subject with sensitivity and talk about the research.

Another high profile article followed which eventually got him with an audience with Sir William Stewart, the head of the Health Protection Agency in the UK.

They were doing some trials at Essex University which were supposed to prove or disprove whether people were electrically sensitive.

Brian agreed to participate in the hope of alerting people to the dangers of EMFs.

After one of the trials Brian, where he was exposed to a mobile phone mast [cell phone tower], he was left with serious heart palpitations, serious pain in his gut and by the time he got home and went to the toilet, he was passing blood. He bled internally for about 10 days.

Brian realized that the study was “a farce” but he continues to raise awareness about the dangers of EMFs through his work as a trustee for the charity Electro-Sensitivity UK and chairman of the Radiation Research Trust.

Brian admits to experiencing symptoms around EMFs still today but says, “if I am not exposed and keep out of the way, my health is fine”. 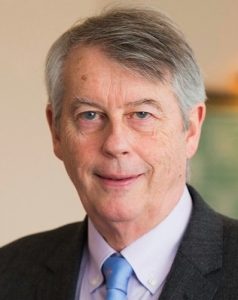 Brian Stein is the former CEO of the biggest chilled food company in the UK. He was awarded a CBE in 2014 for services to business and the charity sector in the Midlands in the UK. He became electrically sensitive in 2000 after 10 years of mobile phone use.

Brian has since been interviewed on national TV and radio about his story and given numerous talks. He is a trustee for the charity Electro-Sensitivity UK and the chairman of the Radiation Research Trust. I will talking to Brian about

*****This interview has now been broadcast to listen to future EMF health interviews fro FREE make sure you are signed up to my newsletter.*****