Small is beautiful, they say.

The Apple iPad tablet seems to hit the spot in both the small and beautiful departments.

Small it may be, but in terms of functionality and computing power the iPad packs a mighty punch.

No doubt this accounts for the iPads runaway success.

Where I live they’re everywhere. 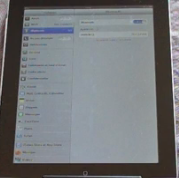 In some schools, I hear they’re being given to kids as standard issue.

If I didn’t know what I know I’d probably have bought one myself.

The reason I didn’t is there’s a catch.

The catch is iPads give off radiation.

How Much Radiation Do iPads Emit?

‘They can’t give off much radiation, they’re too small, right?’

That’s to say, it’s not about the radiation per se it’s about your exposure.

Does that make sense?

If I said to you ‘which is more dangerous, a cell tower or a cell phone?’

What would be your answer?

What really matters is your exposure.

If you’re talking 5 or 6 hours a day on your cell phone and live a long way from a cell tower then the answer is your cell phone is more dangerous, because your exposure’s higher.

If you virtually never use your cell phone but you live within a 100 yards of a cell phone tower, then the cell tower is more dangerous.

Why Are iPads So Dangerous?

And this is why iPads are so dangerous. Exposure.

Their design makes them more dangerous than other types of computers, 2 reasons:

I’ve made a video where I measure the exposures using EMF meters so you can see what I’m talking about:

“Microwave radiation absorbed from tablet computers (Wi-Fi) positioned close to the body can be similar to that from mobile phones as they have similar maximum specific absorption rate (SAR) values.
Average maximum SAR for a sample of 358 digital mobile phones is 1.02 W/Kg in 1g tissue (sarvalues.com; adult); iPad maximum SAR on Wi-Fi is 1.19 W/Kg in 1g tissue (iPad Information Guide; adult). Thus, wireless computers positioned close to the body could expose the users to similar levels of radiation as mobile phones.“

Given that iPads, unlike many of the latest smart phones, currently do not have the means to reduce power selectively based on proximity to the nearest modem/router — they emit maximum power constantly.

Conclusion: iPads can expose you to as much (if not more) radiation than cell phones.

Now you can understand why I don’t own an iPad.

There are much safer, low-EMF ways, of using a computer and connecting to the Internet.

But for those of you that do use an iPad you need to use it safely.

How To Reduce Your EMF Exposure

Here’s how to reduce your EMF exposure when using an iPad:

Distance is critical. Its effects are exponential.

Just a small increase in distance between you and your iPad translates to significantly less exposure.

If you’re using an iPad use it intelligently.

For more information on EMF protection sign up to my FREE Report and newsletter [1].

It’s now possible to connect your iPad to the Internet via Ethernet [2].