There is a significant amount of EMF scientific research which shows that cell phones, WIFI, Bluetooth and many other ‘smart devices’ found in most homes emit a form of electromagnetic field called radio frequency (RF) radiation or microwave radiation, which can cause disease. In many cases EMFs are emitted by these devices even when they are on standby.

Research also shows that low frequency electromagnetic fields, as emitted by household electrical wiring, can also cause cancer and many other serious diseases.

For decades we have been told by our governments, the companies selling these devices and even the medical establishment that these EMF exposures are perfectly harmless.

The argument most commonly used is that the power levels used are too low-level to cause a measurable heating effect and therefore they can’t harm you.

There is no heating effect but thousands of studies show there are many serious adverse biological effects from these exposures on our biology, including:

This 9 minute presentation by Prof. Martin Blank formerly Special Lecturer in the department of physiology and cellular biophysics at Columbia University explains some of the important biological effects of EMFs:

The adverse biological effects of EMFs have been known about for nearly 50 years as confirmed by a Naval Medical Research Institute Report dated 1971 listing 2300 studies.

A Congressional Staff Briefing in 2001 revealed that there are adverse biological effects to EMFs at levels 76000 times lower than the safety standards, you can see the full presentation here

In 2010 the results of the $25 million Interphone study, the most far reaching study of its kind run across 13 countries, found:

In 2011 the WHO’s International Agency for Research on Cancer (IARC) concluded that cell phone radiation and WIFI, and other RF frequencies in the band 30 kHz – 300 GHz are possibly carcinogenic to humans (Group 2B).

EMFs first impact the body in a myriad of subtle ways, the adverse biological effects discussed above, over time studies show these exposures are linked to numerous diseases, including:

Ground breaking EMF scientific research by Dr Martin Pall has found the mechanism for the non-thermal effects, via disruption of the voltage gated calcium channels (VGCC) in cells. In other words, now have an understanding as to how EMFs at even very low power levels can cause disease.

Research On How EMFs Impact Your Reproductive Health

You might also be interested in my extensive articles on how your cell phone may be killing your sperm and how cell phones cause female infertility.

Research On How EMFs Impact Your Immune System

EMF exposures can cause adverse biological effects on your body including cell damage, oxidative stress, DNA damage, reduction in melatonin production and neurological changes that can weaken your immune system (other studies with mice have found similar effects) and evolve into many different illnesses. EMFs can act as an immunosuppressant, thereby making your immune system unable to respond to toxins and other attacks. This can mean that bacteria, viruses, mold, pesticides and other chemicals can easily infiltrate your body. Cell phone radiation specifically has been found to damage immune sells. The Bioinitiative Report also has an entire section on the effects of EMFs on the immune system.

Here is a listing of over 20 studies documenting a “disrupted immune function” from exposure to radio-frequency radiation.

Studies On How EMFs Impact On Our Children

In 1996, Prof. Gandhi from Utah University was the first to publish a study showing that children are more exposed to radio frequency radiation than adults. His research showed that 5-year-old and 10-year-old children have higher absorption rates than adults because their skulls and bones are thinner, their brains and bodies contain more fluid so they naturally absorb more cell phone radiation than adults.

You might also be interested in my article on why children are more at risk from cell phone radiation.

5G is the latest generation of cellular technology.  Yes you are going to be able to do even more amazing things with your cell phone but independent scientists are ringing the alarm bell as to the health effects of 5G radiation.

In this video former president of Microsoft Canada Frank Clegg explains the dangers of 5G:

In 2017, 180 doctors and scientists from 35 countries signed a petition calling upon the European Union to enact a moratorium on the rollout of 5G until potential hazards for human health and the environment have been fully investigated by independent scientists.

Interestingly Swiss Re, one of the world’s leading insurance providers, rated 5G as a “high impact” risk for the insurance industry that may affect property and casualty claims.

Studies on millimeter wave show that 5G is going to use show that these exposures can impact the skin, several Russian studies have shown this: 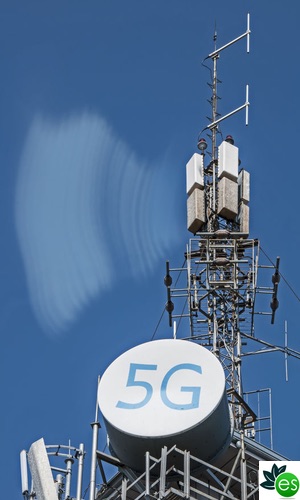 Other studies have found effects on the eyes. An study conducted by the Medical Research Institute of Kanazawa Medical University found that 60GHz “millimeter-wave antennas can cause thermal injuries of varying types of levels. The thermal effects induced by millimeterwaves can apparently penetrate below the surface of the eye.”

You might also want to read my detailed article on 5G radiation dangers.

5G has been used as a directed-energy weapon: the ADS (active denial system)

In the video below Barrie Trower former Royal Navy microwave weapons expert, explains how 5G has been used as a crowd control weapon.

This page gives a quick overview of the EMF scientific research, I have also written many other articles which delve into the science on specific aspects of EMFs, for instance EMFs form cell phones, electrical wiring, dirty electricity. Use the search box at the top of this page to explore these topics.

Not surprisingly EMF exposures also impact animals and wildlife. That includes your pets, including dogs and cats. But birds and bees appear to be particularly vulnerable. Here is a link to over 150 peer reviewed studies on how EMFs impact wildlife and animals.